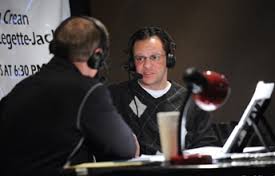 Tom Crean’s closing during his radio show last night has Indiana fans wondering about the future.

Hard to figure out what is going to happen next, but Tom Crean may have foreshadowed the next shoe to drop with his sign off to Indiana University voice Don Fischer, “There is a lot of great honors you can get in any walk of life, but especially in coaching basketball, but being able to partner up with you the last seven years, being able to be in here with you this year, to be at this podium with you, I’d put that right at the top, and I’m dead serious.  So thank you, for everything.””

Does that sound like a guy committed to returning or saying goodbye?

Time will tell, and if Wichita State is able to end the Hoosiers season Friday at 5p-ish, fans may not have long to wait to find out.

People generally don’t say goodbye unless they are leaving, and when Crean spoke about the “last seven years,” ears across Indiana perked up.  It was kind of like seeing your gravestone with the year of death carved into the marble.

There are so many divergent opinions about Crean as the leader of the most important job at Indiana University that gauging the joy, sorrow, ambivalence, hope, disdain, and optimism that might accompany the departure of the latest coach to fail to thrill the difficult-to-satisfy Hoosiers fan base is like catching a ball of water.

For those who wish Crean gone, the question remains who might be willing to replace him.  Indiana is not a top five national job, and it might not be a top five job in the Big Ten.

Put yourself in the shoes of a candidate, and evaluate the Big Ten’s basketball programs.  Is Indiana better than Michigan State?  No.  How about Wisconsin?  Nope. Ohio State?  The Buckeyes are flush and can spend without fear of running the well dry.  Michigan?  Same thing.  Rutgers, Northwestern, Penn State, Nebraska, Illinois, Minnesota, and Purdue are at the other end of the spectrum.  IU has an edge in history over Iowa and Maryland, but in terms of the last decade, they are pretty close.

Candidates are not going to be swayed by, “But this is Indiana!”  They need cash, resources, and a light of success at the end of a short tunnel to consider a change.

Minus Fred Glass emptying his wallet ($6-million/year?) on a rainmaker like Brad Stevens, what candidate who would unify and please Hoosier Nation will take the job?  Sean Miller?  No chance he’s leaving Tucson for Bloomington.  Fred Holberg?  His end game is an NBA gig.  Tony Bennett?  He refused to interview for some NBA jobs and makes over $2-million in salary and bonuses at a place where he and his family have roots.  Will $4-million make pry him from Charlottesville?

Gregg Marshall?  No chance Indiana brings that cantankerous but successful guy to Bloomington.  As nutty and difficult Crean can be, people in Wichita are far less kind in describing Marshall.  Shaka Smart, Archie Miller, Bobby Hurley?  Hurley is kind of interesting.  Winning at Buffalo isn’t easy.

One thing for sure, Glass can’t afford to hire “a guy” because his equity has been drained due to the extension he negotiated with Crean that includes a wacky buyout of $12-million.  Indiana needs to replace Crean with THE right guy, or why replace him at all?

The tone at the end of Crean’s radio show was ominous, but potentially meaningless.  It did drive forward the story of Crean potentially accepting another job, which would seem a silly choice for Crean to consciously make if he isn’t going to leave.

The doubts about the direction of Indiana’s program are certainly not helping Crean recruit to Indiana, and would seem to make longterm survival less certain.

Crean is a very savvy user of the media, and is very aware of what he says to it, which is why the comments yesterday are being taken seriously.

What he said last night was yet another set of tea leaves that point toward one potential outcome, but reading too much into it will either bring you joy or disappointment depending upon which side of the Tom Crean fence you currently stand.