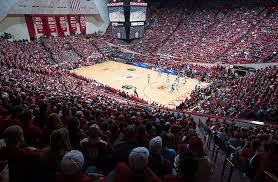 Assembly Hall is the temple where Indiana fans congregate, and all they demand for their passion is hope. If Tom Crean cannot provide it, someone who can will be sought.

Virtually every home game sees almost every one of the 17,472 seats at Assembly Hall filled with excited fans hopeful that brighter days are ahead for the Cream & Crimson.  Kids ask for a pair of candy striped warm-ups for Christmas, and each recruiting success is examined with a forensic eye for detail.

It’s been 28 years since Indiana’s last National Championship, and 13 years since the last visit to the Final Four.  Over the past 20 seasons, Indiana has compiled 177-163 record in the Big Ten, and the two trips to the Sweet 16 since 2002 coincided with Cody Zeller’s presence in Bloomington.

Indiana fans continue to loudly insist the Hoosiers are not just relevant, but a top five national program.  UConn has won four of the last 16 NCAA Tournaments. Kansas has won 11 straight Big 12 titles and a National Championship.  Duke has won four NCAAs since IU’s last and has lost five or fewer ACC games in all but won of the last 19 seasons.  North Carolina has won two NCAAs and six ACC titles since Roy Williams took over in 2003.  Kentucky?  All time winningest program with 2,174 victories, a 529-64 record at Rupp Arena, 48 SEC regular season titles, eight NCAA championships, and a likelihood of finishing the current season 40-0.

Hell, Wisconsin has never finished lower than fourth in the Big Ten under Bo Ryan (who took over in 2001), with winning conference records in every single season.  How about Michigan State?  In Tom Izzo’s 20 seasons, Sparty has gone to six Final Fours, 12 Sweet 16s, and finished first or second in the Big Ten 11 times.  Tom Izzo has lost a total of 107 Big Ten games.  Crean has lost 77 in 13 fewer seasons.

I could go on.

None of this is meant to demean Indiana Basketball, which I have loved since IU won a National Championship my freshman year in Bloomington.  The precision and beauty of the motion offense and the tenacity of the Hoosiers’ man-to-man defense was a joy to behold.  Indiana won, and they did it with players who attended class, earned degrees, and were recruited on the up and up.

With many Indiana kids, recruiting was marked by abject indifference from Bob Knight, and still the players came.  And they won.

Those days are gone, but for some reason, the passion of the fans has metastasized.

That unyielding love is a double edged sword that can defend a bully like Knight, or slay coaches who do not satisfy their unquenchable thirst for stylistic play and victories earned in bulk.  Mike Davis was hailed as a flawed but congenial hero in 2002 after IU advanced to the NCAA Championship game, but consigned to the scrap heap after the following four years of mediocrity.  Davis was a hermit in the end, beaten by the fans whose relentless derision was impossible to compartmentalize.

Kelvin Sampson surrendered the moral high ground Indiana had gained throughout generations of exactitude in following NCAA rules.  Dan Dakich was a defibrillator that shocked players back into Indiana-esque compliance, or stunned them right out of Bloomington, and Tom Crean has been an ill-fitting occasionally successful coach too eager to be liked for a fan base who views a natural desire for popularity as a critical weakness.

The fans that celebrated wins with Crean in the concourse of Assembly Hall now yell “Tom Crean sucks!” when his son Riley enters a game for his high school team.  Crean says his wife feels “anguish” as she watches Riley or the Hoosiers play.

That passion is an unwieldy beast that can turn quickly, but never fades.  There is a constant search for reasons to hope, and it sometimes bring fans to the brink of madness.  As soon as a coach fails to provide motive for faith, they turn.

And they have turned on Crean.

Hope will return to Bloomington because it is the fuel powering the insane fandom that is the last remaining vestige of brighter days long gone.