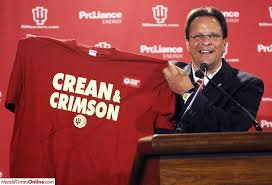 One thing is certain about the lifespan of a college basketball coach. The first day is the happiest – especially for a “bad fit”, as CBS Sports Chris Spatola called Tom Crean.

As Indiana prepares to play Wichita State in the opening round of the 2015 NCAA Tournament, conversations among Hoosiers fans have little to do with that intriguing matchup between two outstanding sets of guards.

Will Tom Crean be fired?  Did what Tom Crean said Monday night during his radio show mean he’s going to quit once the season ends?  Those are the two questions that begin every conversation about Indiana Basketball.

When I spoke to CBS Sports Chris Spatola yesterday on my show on CBS Sports 1430 in Indianapolis, the conversation started and ended with the bracket, but the middle was all IU, and Chris brought great insight.  Chris played basketball at Army, served on Mike Krzyzewski’s staff at Duke, and now works as an college basketball analyst for CBS.

“You’re basically bringing a guy that had Dwyane Wade at Marquette, had mild success.  I think his success at Marquette was inflated.  And then they get him at Indiana, and I think it was flawed to begin with.”

Then we talked about the value of the job and Indiana brand as a basketball program, “The brand is degraded.  It get it.  It may not look like the job it was a few years ago, but the structure is still in place.  I put it up there with a Kansas, a North Carolina, with a Kentucky.”

I asked him whether Indiana could change the hope quotient for its fan base without changing coaches, “I don’t think so, Kent, because I think what’s happened is that program is reflecting the personality of the coach.  Without getting into too much about Tom Crean, I think what’s going on there is starting to reflect his personality, and it’s too far gone with Tom Crean….We’re in the death spiral.  That’s the best way to put it.  I don’t think he can climb out of that.

“And then I’m reading this morning about the comments he makes (on his radio show), and it sounds like he’s feeling the death spiral.”

Chris then spoke about the level of coach needed to bring Indiana back to prominence, “If you get the right guy, like Calipari is the right guy at Kentucky, if you get a Billy Donovan (Chris brought up Donovan because of rumors, not as an endorsement – Chris believes that if Donovan bounces from Florida, it will be for the NBA) at Indiana, that all of a sudden enhances that brand to where it is.  I think that’s a top five job.”

While Indiana fans are still split regarding Crean, and have plenty of opinions about the future of the program, there is unanimity about the need for change if only to provide a reason for hope – the fuel that has powered Indiana Basketball fandom for a generation.

The immediate question is whether Indiana can beat Wichita State and Kansas to advance to a third Sweet 16 in four years.  If that happens, the Crean leaving narrative is shelved for the immediate future.  If Indiana loses tomorrow, the interest in what Crean and athletic director Fred Glass will do next will launch into hyperdrive.

And then the list of potential candidates for one of the most coveted jobs in sports will be open for the fourth time in nine years.  Getting it right will be the biggest challenge of Glass’s career, and will be his defining moment.

16 thoughts on “Indiana Basketball – Tom Crean a bad fit from the beginning, death spiral has started”