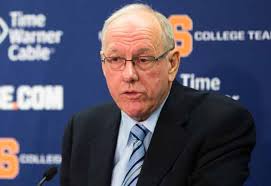 Every once in a while, the corrupt system in college sports punishes a guy who did nothing most don’t. That has left Jim Boeheim bewildered by sanctions including scholarship losses, 108 wins stripped, and a suspension for nine games next season.

What Syracuse head basketball Jim Boeheim coach knew, encouraged, violated, or ignored is not at issue.  Neither is whether Boeheim appeals sanctions levied by the NCAA that will hinder the Orangemen program’s competitiveness for the next three seasons.

What’s important is that many college students, who are also athletes, are being preyed upon to feather the opulent nests of coaches.  Book after book have been researched and written, and NCAA investigation after NCAA investigation have been conducted.  The findings show longterm egregious exploitation of young men who are supposed to be educated as payment for thousands of hours of work.  Athletes are part of a business model where coaches make many millions each year and schools work tirelessly to spend all their revenue because showing a profit will fuel calls to pay athletes as employees.

And what did Boeheim whine about in his press conference yesterday?  The NCAA sanctions aren’t fair to him.  Who gives a damn what’s fair to Boeheim?  Let’s talk about the kids who should have been educated instead of made eligible to play so they could give Boeheim his best chance to win games.

“Although the infractions report does not find that I had personal involvement in any violations of NCAA rules, the Committee on Infractions has asserted that for the past 10 years, I did not promote an atmosphere of compliance within the men’s basketball program, and I did not monitor the activities regarding compliance of those within the program,” Boeheim read.

“This could not be further from the truth. This is far from a program where student-athletes freely committed academic fraud. I believe the penalty is unduly harsh.”

We could spend hours parsing the phrasing used by Boeheim, like why the word “freely” was used to modify “committed”.  And he might be right that he did “monitor the activities regarding compliance of those within the program.”  It may be that he just monitored it poorly.

Eligibility is the goal at many university athletic programs rather than providing a meaningful education.  Every once in a while, a school leaves a trail of emails that allow the school or NCAA to rear its head and claim a stand on a withering moral high ground with a smackdown the likes of which Boeheim decried yesterday.

It would be easy to hammer Boeheim for being self-righteous and Nixon-esque in his non-denial denials, but the system is so screwy that I’m willing to give him a pass.  Boeheim is bereft of the character needed to accept culpability after 40-years in a business where admitting mistakes is the only unpardonable sin – other than losing.

Chaos is rewarded, adherence to a code where meaningful educations for all is shunned or short-circuited, and the ends justify the means – and have since the beginning of collegiate athletics.  These sad truths have allowed slime to prosper, and lose its grip on the principle that should guide everything that occurs on a college campus – as Emil Faber’s statue in “Animal House” so succinctly stated, “Knowledge is good.”

College athletics are a wonderful venue for teaching so many important lessons.  Nowhere outside the military are young people exposed to adversity on the level that exists in college sports.  There is a perfect link between hard work and a positive result that ordinary students are not exposed to.  There is so much good in college sports that allowing the massive potential for revenue generation to poison it is unconscionable.

Winning means everything, and coaches are hired, rewarded, and fired due to their ability to win and perpetuate the facade of amateurism.  Coaches, administrators, and all others who cash checks drawn on accounts bulging with cash made available through media contracts, ticket sales, and merchandising made possible by the efforts of unpaid labor yammer endlessly about the value of an education as compensation for athletic prowess.

The weakness of using the term “student-athlete” – a term former NCAA head Walter Byers invented to sidestep a possibility that schools might have to pay workman’s comp to injured athletes – as an employer would for an employee – is exposed by the torrent of programs being found in violation of the tenets of the NCAA.

Boeheim is not a cause of the problems that are pervasive in college sports, just a cog in a wheel crafted and greased by profiteers.  The confusion Boeheim feels as the result of the NCAA’s bludgeoning of the program he built is understandable.  He isn’t doing anything that dozens if not hundreds of coaches have done throughout time to win and continue to enjoy the largesse provided by a talent for prodding and pushing kids to heave a leather ball through an orange hoop.

None of it makes sense.  For Boeheim to expect it to is his only real mistake.