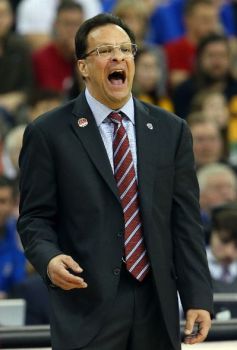 If nothing changes at Indiana, is hope for improvement reasonable?

Hope is the fuel that powers college sports fandom in all its forms – ticket sales, TV viewing, merchandise sales, and checks written by boosters.  Hope for the long term future of the Indiana Basketball program is currently lacking in Bloomington.

The lack of enthusiasm for Indiana’s 2015-2016 season has very little to do with today’s first round 81-76 loss to Wichita State in which Indiana showed plenty of what it does well and poorly throughout.

Three-pointers fell often for Indiana (11-of-22 from deep), and defensive miscues were just as frequent.  Hands down on close outs, bad reads on Wichita State out of bounds plays, and general confusion allowed Gregg Marshall’s squad to score their second highest point total of the season (Southern Illinois allowed 84 to the Shockers).

Yogi Ferrell was splendid in many ways, and freshman Emmitt Holt picked up four fouls in six minutes.

Tom Crean spoke of his players with pride, “We’re not happy with the outcome today, certainly we could have played better, but I have zero disappointment in the way these guys battled, competed, got better and persevered throughout the season.”  Good stuff.  That’s what a coach should say once the season ends in disappointment.

Then Crean couldn’t help but talk about how the Hoosiers exceeded expectations, “They have persevered through adversity, persevered through different trials, and they did some things that not a whole lot of people expected them to do. Unofficially picked 11th in the league and they get into the NCAA Tournament with a 10th seed as the youngest team.”  Translated out of coach-speak into English, “I did a hell of a job this year coaxing a miraculous 9-9 Big Ten record out of this group of ragamuffins.”

He then claimed the players improved throughout the season, and acknowledged the illogic of the statement by saying that only he could see it, “I think they got a lot better during the year. Our record didn’t always reflect it in some of the games, but I’m with ‘em every day, so I’m going to stick with being the judge of it.”

Forget losing 10 of their final 15 games, Indiana continued to improve because Crean saw it during expanses of time when fans had no access to the team.  Maybe Indiana should sell tickets to the practices, so fans can see Indiana at its best.

The Hoosiers were excellent again in the classroom, players who stick around Bloomington for even three years are very likely to earn their degrees, and NCAA investigators aren’t combing through emails from academic advisors to professors to find papers written on the players’ behalf.  That stuff is good and necessary at Indiana.  Fans will tolerate less than perfect basketball, but not a lack of compliance with NCAA rules.

Arrests for alcohol related offenses, suspensions for multiple dirty drug tests, and a fractured skull in a Halloween accident left fans and media questioning the off-court leadership provided by Crean.

The 2014-2015 season wasn’t all bad, and it wasn’t all good.  As evidenced by the 9-9 Big Ten record, there was a virtually equivalent amount of each.  But from what evidence does hope for a better season in 2016 come?

All 13 players on scholarship are eligible to return.  Two new guys from Missouri are headed to Bloomington, and we are safe in assuming two players currently on scholarship will be asked to scram or start writing checks.  If incremental improvement from the current roster plus two Missourians brings more wins, that would be great but very unusual.

Has Indiana Basketball fallen so far that exceeding low expectations defines success?  There are no banners for “eclipsing predicted finish in the Big Ten by three positions.”  By the way, my memory of expectations as voiced at Big Ten Media Day was that Wisconsin would be at the top, Rutgers and Penn State at the bottom, and anything could happen from second through twelfth.

The question isn’t whether sane Indiana fans hoping for brighter days is reasonable, but what needs to be done to prompt it.