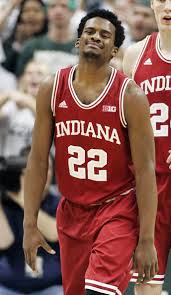 Stanford Robinson made the prudent decision to leave Indiana’s Basketball program so he could play more – and closer to home.

Indiana University basketball coach Tom Crean is so well known for the practice of stripping scholarships from current players in order to accommodate new recruits that it’s widely referred to in college basketball as “Creaning”.  When occasionally wayward guard Stanford Robinson announced his intent to transfer from the Indiana program yesterday, many believed he was the latest victim.

Not so fast, my eager-to-find-any-reason-to-discredit-Tom Crean friend.

If anything, Crean deserves some praise for sticking by Robinson throughout the 2014-2015 season.  The sophomore was the author of a couple of embarrassing incidents that painted Crean as a coach who neglected to instill discipline in players who clearly needed a strong dose.

In his first 15 months on campus, Robinson tested positive for drugs often enough that a four-game suspension was mandated, and his arrest for trying to use a fake ID to gain entry at Kilroy’s Sports during Little 500 Weekend showed a disregard for the law and logic.

During the 2014 Big Ten Tournament, Robinson engaged in a heated exchange with assistant Kenny Johnson as the two sat together on the bench.  Robinson flailed his arms while screaming at Johnson.  If that reflected his frustration with the program, I would have expected him to transfer then.

By the way, the offenses themselves weren’t embarrassing, except for the fake ID arrest coming during Little 5.  Everyone knows the excise cops are out then.  The pot stuff is ridiculous.  Just legalize the crap, and be done with it.  The embarrassing part was that Crean had to answer for it, and be held accountable.

Whether out of concern for Robinson and a desire to help him, or because a thinner bench his Indiana team did not need, Crean stayed with Robinson throughout the season.  There were opportunities for him to contribute, and he did.

One of the great assets of competing in collegiate sports is in learning how to deal with and overcome adversity.  Crean keeping Robinson through this season allowed him to do that, and what he learned about himself through the process should benefit him for the rest of his life.

And this transfer was entirely foreseeable, regardless of the legal bumps and bruises suffered along the way.  Robinson’s minutes dropped from 17 to 11 minutes per game during his sophomore season, and his scoring dipped from 6.4 to 3.0 points per game.  His shooting percentage receded from 44.8% to 36.7%.

Nothing that Robinson did on the floor improved from his first year to second, and there was no likelihood things would change for him as a junior.  Parachute out now or watch your basketball career crash into the quickly approaching rocks was his choice.

Two years of eligibility left is the time to go, and that’s what is left for Robinson.  Redemption may be gained with a fresh start at a new address.

What did Crean risk by sticking by Robinson?  Another arrest, failed drug test, or bad choice made public may have cost Crean his job – for cause.  The difference between for cause and not for cause?  Right now, it’s around $11.3 million.  That’s a hell of a lot to risk for a deeper bench, or because a kid needed a chance to redeem himself.

But Crean did it, and Robinson paid off that risk by staying out of trouble for the duration of the season.  Now, he gets to go to a school where he might play a little bit more in front of his family.

Everybody wins, including the math wizards who are trying to figure out how 15 kids could use 13 scholarships.  Well, they are still a little bit baffled over 14 kids and 13 scholarships, but -1 beats -2 – unless this Bryant kid commits, and then the confusion mounts and the Creaning may start.