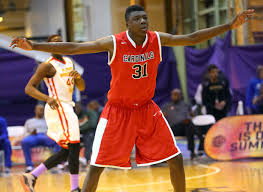 A ray of sunshine is all Hoosier Nation needs to invest hope in another season, and that is exactly what Thomas Bryant brings with him to Bloomington.

The narrative changed a little bit today, but that doesn’t mean the reality will be any different for Indiana Basketball in 2016.

As I sit watching Michigan State’s season wither at halftime, thinking about what it would take for Indiana to return to the Final Four for the first time in 14 years keeps dancing in the back of my mind.

As miserable as the Spartans fans sitting in front of me in the south end zone of Lucas Oil Stadium might be, at least they are her – at least they enjoyed an extra 15 days of hope this might be their year.

Indiana fans have knocked into each other for years wondering if hope is a good thing in which to indulge, and today’s commitment of a 6’10” talent is enough to lure them back.

A significant din of voices began calling for the head of coach Tom Crean as the season unraveled in February, and has only grown louder since IU’s season was ended by Wichita State in the round of 64.

Re-plating the cultural build undertaken by Crean seven years ago is a big decision.  One need only to look at Mike Krzyzewski (35 years), Tom Izzo (20 years), and Bo Ryan (14 years) to see the wisdom of of consistent leadership.  John Caliper is an outlier in that he has an unreasonably good knack for attracting talent to Lexington.

Hope is an alluring mistress, and all that is necessary to ignite it is a small change in the construct of the team.  When things are going badly, any change is seen as a positive.

The commitment of Bryant – a McDonald’s All-American at the position where Indiana has a significant need – is just such a reason.  Even after a Big Ten record of 44-46 over the past five years and 16-20 over the past two, Hoosiers fans will be willing to see a glimmer of hope at the end of this 14-year long tunnel of mediocrity.

But hope means expectations will again be raised, and where there is hope and expectations, disappointment lurks perilously close to Assembly Hall.  Another blah season and the calls for Crean to hit the bricks will be stronger and more resolute than ever.

The development of Robert Johnson and James Blackmon and return of Yogi Ferrell for his senior season might have been enough for the easily swayed to climb on board for yet another year of believing until logic demanded otherwise, and for some the logic train pulled out of the station for good with the Sweet 16 loss to Jim Boeheim’s Syracuse Orange and early departure of Cody Zeller and Victor Oladipo – which should have been a plus for Crean.

Crean is paid like an elite coach, and Indiana fans are continually told and echo the belief that IU is still a top five program despite mountains of evidence to the contrary.

Indiana has been average in the aggregate for nearly as long as Bryant and the other incoming freshmen have been alive, but Bryant gives them a chance to improve, and that might be all that’s needed in a Big Ten where the middle is expected to be as crowded next year as it was in the season that’s ending right now for the Michigan State Spartans.

At this time next, maybe Indiana will be lucky enough to have its season end like this in Houston

3 thoughts on “Indiana Basketball – Commitment of Thomas Bryant gives reason for hope in 2016; that’s not always a good thing”