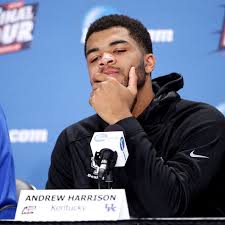 Kentucky’s perceived lack of sportsmanship not an issue – at least not to me, and who respects Kentucky less than I do?

Twenty year old kids are going to behave erratically when forced to shake hands and answer questions immediately after an emotional loss.

When Kentucky’s dreams of an undefeated National Championship run were ended late last night at Lucas Oil Stadium, the Wildcat players were crestfallen.  They knew their run to perfection had ended, and their behavior belied their immaturity.

Andrew Harrison used language in front of live microphones in response to a question about Wisconsin center Frank Kaminsky that should never be uttered anywhere, and he and a few teammates decided the ridiculous ritual of shaking hands immediately after a game’s end was not worth their effort.

Some are saying that Kentucky players revealed themselves as classless.  Nonsense.

I may be the last person on this planet expected to defend any perceived negative regarding Kentucky Basketball, but in this case, I have only one issue and that is Harrison’s use of the 100% repulsive use of the N-word to describe Kaminsky.

The handshake line is an ill-conceived attempt to codify the notion that these young men play sports without ill-temper and can be best buddies immediately after a hard fought game.  Nothing like vacuous utterances of “Good game. Good game.  Good game…” to make those watching believe that basketball is just a well-intended diversion for the players.

Forget that many of the players who both won and lost last night work many hours every day to refine their basketball skills from age six through yesterday just for the chance to play in a game as meaningful as last night’s.

Many never get over the disappointment of losing a game like last night’s classic in an hour, a day, a year, or ever.  Fans and the media expect kids to get over it in fifteen seconds.  “Tough loss boys!  Shake hands!”  Yeah, right.

As for the “F**k that n***r,” comment from Harrison.  Do you expect Harrison to send Kaminsky a bouquet of flowers to congratulate him.  Minus the n-word, I have no problem with that either.  The media and fans always blather about their fatigue for players and coaches sticking to the postgame script.  They want honesty – until they get it.  Then they eviscerate the guy who has the temerity to say what pops into his head.

Harrison is a competitor who had a chance to be a part of something that has not been done in 39 years.  This Kentucky team would have been welcomed into a very small club of immortals, but because they took their foot off the throttle and allowed Wisconsin to stay in the game longer than they had any business being in it, the kid’s dream was crushed, and he muttered ill-tempered invective near a live mic.

I’m good with all of it.

Kentucky lost last night in a hell of a basketball game.  They flirted with disaster against Ole Miss, Georgia, and Notre Dame, and they finally came up against a fundamentally sound and experienced team that played a great final five minutes.  Goodbye 40-0.

That chapped Harrison’s ass.  I would expect it might.

If I were putting together a team, Harrison and his twin brother would be among the first in college basketball I would go get.

And for those thinking Kaminsky might harbor ill-will against Harrison, that’s even sillier.  Players know how deeply disappointed they are after a loss.  If Kaminsky liked Harrison before the comments, I’m sure he still does.  If he respected him, that probably hasn’t changed at all either.

If you think all of these players are good-natured choir boys who understand basketball is just a silly game, you’ve never invested the time needed to be great at a team sport.

Don’t let this media-created maelstrom shade your feelings about Harrison.  He’s the same kid he has always been, and similar to the way most are.  He was just more honest at an inconvenient time.

23 thoughts on “Kentucky loses to Wisconsin, but the Andrew Harrison postgame issues are fine by me”