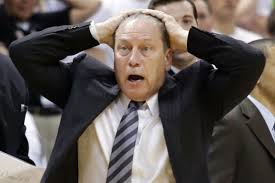 Tom Izzo was nowhere near this anguished when he learned that John Calipari was elected to the Basketball Hall of Fame, while he was not even a finalist.

This argument on the day of a National Championship that could have featured both Kentucky’s John Calipari and Michigan State’s Tom Izzo, but doesn’t. is whether Izzo should have beaten Calipari to enshrinement in the Basketball Hall of Fame.

The Hall is expected to announce this morning that Calipari has been elected as part of the 2015 class, while Izzo was not a finalist.

In the end, it won’t matter as both coaches will have their day, but opening the gates for Calipari prior to Izzo seems a strange choice.

Calipari spent the first 17 years of his career as a head coach at UMass (Atlantic 10 Conference) and Memphis (Conference USA) before coming to Kentucky of the Southeastern Conference for the past six years.  He’s amassed a 593-176 record with five trips to the Final Four (adjusted for the two that were stripped due to NCAA violations) with one National Championship.

Izzo has been the head coach of Michigan State (Big Ten) for 20 seasons and has put together a 495-199 record with seven Final Fours and one National Championship.

Kentucky has been the top basketball program in the country during the Calipari era that has seen many talented players report there to prepare for the NBA, which is the goal of most of the top talent in the country.  That recruiting philosophy has brought a six-year tour of basketball excellence to Lexington.

The separation between the two comes with the conferences in which both have competed and the resulting gap in strength of schedule.  Calipari’s combined strength of schedule for his teams at UK, Memphis, and UMass – 5.57.  Issue’s is a robust 9.20 because not only does Michigan State play in the Big Ten – often college basketball’s best – but he schedules a very solid slate during the preseason.

Calipari’s work in the SEC for six years has been great, but the SEC is rarely playing the same level of basketball from night to night as the Big Ten, and then add the A-10 and C-USA years, and comparing Izzo’s success favorably to Calipari’s becomes even easier.

While Calipari has had two teams stripped of Final Fours as well as a number of wins and losses, he has never been named as a violator in either NCAA investigation, so there is no need to indulge in a conversation about rules and recruiting methodology in evaluating Calipari.

If you want to grade Calipari down because you refuse to believe he didn’t know about the payments from an agent to UMass All-American Marcus Camby or Derrick Rose’s decision to have another person pass the standardized test needed to gain eligibility at Memphis, that’s fine.  I choose to trust the NCAA findings and not use those incidents as demerits against Calipari’s candidacy.

Izzo’s slate with the NCAA isn’t completely clean either.  He was suspended for one game after the NCAA found that he employed a camp staffer who was associated with a recruit.  Izzo apologized for paying the counselor $475 for one week’s work, but said the violation was inadvertent.

Both Izzo and Calipari are iconic coaches in college hoops who have enjoyed rare success.  Both belong in Springfield, and will be there eventually.  Not sure what the motivation was for the committee to select Calipari first, but seeing the wisdom of the snub of Izzo is difficult.