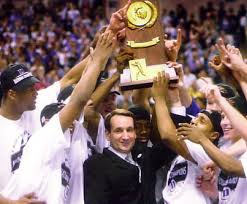 Betting against Coach K to fail in Indianapolis was proven again to be unwise.

The Final Four has been held in Indianapolis six times, and Duke has qualified for three of those celebrations of amateur basketball (1991, 2010, 2015).  They have won the National Championship all three times.  Yet, only 9.8% entrants in the ESPN Bracket Challenge guessed Duke would win.  Idiots!

Kentucky was supposed to have been coronated last night as the first undefeated champ in 39 years, and they almost pulled it off.  That was the most compelling narrative of the season, but not the only one.

Coming off a season where Indiana schools were shutout of the NCAA Tournament in 2014, the future was unsure for Indiana, Purdue, Butler, and Notre Dame.  Each of those programs bounced back, but with different levels of success.

After a 17-15 campaign, the pangs of discontent grew louder in Bloomington, and Indiana delivered early in the Big Ten season, posting a 5-1 record.  That start was enough to allow Indiana to earn a ticket to the Big Dance as a 10-seed – the first double digit seed in program history, but a ticket is a ticket.

Fans hoped for a fresh start against Wichita State, but were denied as the Hoosiers again failed to play the kind of defense that results in tourney success.

The Hoosiers ended the season 20-14, a step in the right direction, but not exactly the stuff that an supposedly elite program is expected to deliver.

No one graduates, but Stanford Robinson and Max Hoetzel both announced their intention to transfer.  With big man Thomas Bryant set to report to Bloomington, and Hoosiers guards Yogi Ferrell, Robert Johnson, and James Blackmon likely coming back, the Hoosiers should take another positive step in 2016.

Expectations for Purdue were low, and after losses at Mackey to Gardner-Webb and North Florida fans were nearing full revolt.  Then the Boilers came together, found their collective heart, and rolled to a 12-6 conference record.

After an opening round 66-65 overtime loss against Cincinnati, fans still felt a few positive steps had been taken.  With the core of the team expected to return, even brighter skies are expected in West Lafayette in 2015-2016.

Butler struggled through Brandon Miller’s only season leading the Bulldogs with a 14-17 record (4-14 in the Big East), and when he decided to abdicate that position, no one knew what to expect from the Bulldogs.  Chris Holzmann took over, steadied the ship, and veteran leadership brought some magic back to Hinkle Fieldhouse.

A bounce-back 12-6 conference mark included a loss in what was the best game I saw all year – a 68-65 loss to Villanova.  Butler’s fight was evident in their NCAA Tournament overtime loss to Notre Dame as well.  Every starter for the Bulldogs played at least 40 points, but they couldn’t get over the hump, and the season ended with work left undone.

The loss of Alex Barlow and Kameron Woods will hurt, but with what Holzmann has returning, another solid season appears within reach.

Notre Dame was a revelation in Mike Brey’s 15th season in South Bend.  It appeared that entrenched mediocrity might be Brey’s ticket to an early retirement, but after a miserable 15-17 season, the Irish re-booted and won the ACC.  After advancing to only one Sweet 16 in 14 years, Brey rolled into the Elite Eight in 2015, and was three missed late free throws from bouncing undefeated Kentucky.

Jerian Grant and Pat Connaughton will graduate and be difficult to replace, but the ceiling has been raised by Brey, and his job is again very safe.

The Big Ten was down by all accounts this year.  Before the season, Wisconsin was correctly and obviously projected as the best team in the conference, and Rutgers and Penn State were thought to be the worst.  The 11 in the middle were almost indistinguishable from one another.

To see two Big Ten teams get to the Final Four was a big surprise, and at least in part attributable to the generosity of the selection committee giving Michigan State a relatively simple path, but still a very positive result for the conference.

College basketball seasons give us a chance to outsmart ourselves with upset predictions and ordaining greatness before it’s earned.  I’m getting out in front of 2021 NCAA Tourney when the Final Four returns to Indy.  If Coach K is still leading Duke, I’ll take them to win it here again with a bunch of kids who are now seventh graders.