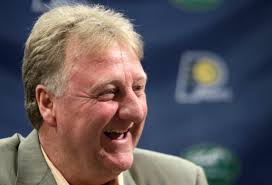 The Pacers work for 2014-2015 is over, but Pacers President Larry Bird is just getting started.

It’s odd how quickly the season transitions to the offseason after that final disappointing game, and last night’s game in Memphis against the Grizzlies certainly qualifies as disappointing.

Making the playoffs had been a long shot for months as injuries were a major issue throughout the 2015-2016 season, and finally health and solid basketball returned just in time to allow for a run that brought the Pacers to the verge of getting over the hump last night during the final game of the 2014-2015 season.

Despite Memphis playing without major contributors Mike Conley and Tony Allen, the Pacers didn’t have enough in the tank after the previous night’s double overtime win against the Washington Wizards, and the Pacers lost a 95-83 snoozer they were never in during a long second half.

An opportunity lost leaves fans and team personnel wondering just what the future holds.  Questions abound, and there are no easy answers.

David West enjoys a player option for next season that he can use to enter free agency or remain with the Pacers at a price of $12.6 million.  Minus an odd first year (2011-2012) with the Pacers where his offensive play cratered, West’s productivity has declined every year since 2009 from 21 points per game to 19 to 18.9 to 17.1 to 14 to 11.7.  Not surprisingly, West’s minutes have declined as well.

That’s the risk of signing an aging (soon to be 35) player that occasionally flashes his former greatness to an expensive deal.  When productivity drops significantly below investment, teams suffer, and West is on the precipice of becoming that kind of burden.

Player options can be dangerous because they give the power over the franchise’s future to the player.  If West decides he wants to play for the Pacers next season, they are on the hook for the $12.6M.  His market value is nowhere near that, so why would he choose to play for less at the tail end of his career?

West has earned $75,668,418 through last night, but after next season his cash flow will decrease by roughly $12.6M, so striking while the iron is hot is the smart play.  Another year of eroding skills might be on the docket.

Roy Hibbert is six years West’s junior, but his act has grown tired in Indianapolis.  Despite a statistical rebound year in per 36 minutes productivity (impossible to believe until seeing it with my own eyes at basketball-reference.com), it’s become clear that playing with a true center is no longer a valid strategy for the Pacers with the Miami Heat no longer the beasts of the East.

The player option for Hibbert is even more stupefying than West’s – $15.5M is a lot of cash for an immobile player who has a difficult time staying on his feet.  Through most of the contract, Bird’s roll of the dice that Hibbert could develop into a Bill Cartwright-esque presence in the middle of a contender seemed reasonable.  After six seasons, the thought of Hibbert anchoring a championship contending team is silly.]

Still, Hibbert now gets to decide whether he will trigger a player option to keep him in Indy for a seventh season.  His value is roughly half the value of his ticket, so he has become the shiny red car that validates a middle aged man’s virility, but loses half its value after being driven off the lot.

Maybe there is a mentally unstable general manager or owner among the other 29 NBA teams who would provide value back for Hibbert in order to acquire his contract.  The 2016 free agent class should feature many exceptional talents, so it might not be so silly to grab Big Roy (or at least his contract) after all.

That begs the question of whether the Pacers might not be better off with Hibbert and West next season, so they potentially have $60-$70 million under a salary cap likely to explode in the 2016 offseason.  One more round-up for the Pacers as currently built before re-plating around George Hill and Paul George, or deal those contracts to build immediately is the choice ahead of Bird.

Bird does not lack patience, so it would not be a surprise to see him stand pat.

Pacers fans also have a draft to look forward to, and while fans and everyone associated with the team would rather be in the playoffs, sliding into the lottery provides hope that a slightly more talented haul might be in store by popping into the 11th spot (because they tied with 38-44 records, Utah and the Pacers will have to arm wrestle for the 11th selection – not really, there will be a coin flip).

Whether the Pacers are 11th or 12th, the chances of moving into the top three when the lottery is held are less than 3%, but with the 11th or 12th pick, the Pacers can likely grab a young big man who might become an upgrade after a season of grooming under Hibbert and West.

Jakob Poeltl is a seven-footer from Utah.  Myles Turner is 6’11” and athletic as hell.  Frank Kaminsky is a seven-footer who was the college player of the year.  Trey Lyles, Kevon Looney, and Bobby Portis are candidates too.

While the Pacers would rather still be playing, if the goal is a championship, losing last night might not be the worst result.  The decisions made during the next 16 months will be much more important than the result of a first round series against Atlanta.

Exciting times off the floor, even if the on-court fun is over.