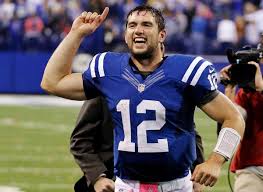 The stars appear to be in alignment for the Colts to enjoy a special season.

When everything looks great, take a peak around the corner to try to find the adversity that is always coming.

When the NFL schedule was released last night, I glanced at how the games aligned because I thought maybe that would bring the reason for a little pessimism as we look toward the coronation of the Indianapolis Colts as the favorites to represent the AFC in the first single letter Super Bowl in 40 years.

Here are some highlights:

Bye Week placement – The closer the bye week is to the middle of the schedule, the better; the Colts will get a chance to rejuvenate their tired legs after nine games – Check!  The Patriots have their bye only four weeks into the season on October 4th.

National TV games – The Colts will be featured as a stand alone night game four times in the first eight weeks, and five times overall (the most allowed by the NFL).  That’s a lot of spotlight.  Does that have any effect on the potential for the Colts to go to the playoffs, Super Bowl, etc…  No, but it shows the marquee value of one of the NFL’s elite franchises.  The Patriots only play four night games.

Home games against even weaker opponents – Not to be outdone by the poor records of the roadies, the teams that visit Indianapolis were a combined 51-77 in 2014.  Remove the tough games against New England and Denver, and the Colts could hardly have an easier set of adversaries.

No three game trips – The travel – even on chartered flights and first class hotels NFL teams enjoy – can be exhausting over the course of a full season, especially when the travel weeks come back-to-back.  Even worse, some teams are forced to travel three straight weeks on occasion.  The Colts have a back-to-back travel opportunity one time, and the back end is against Jacksonville.  The Patriots play back-to-backs twice, including the last two games of the season.  The only trip the Colts take west of the Mississippi is to Houston.  Nice!

No London – While this is something you would think might be detrimental because routine is precious for NFL teams, there is no deleterious effect through the small sample size of 11 games in London.  Teams always have a bye week scheduled after their trip to London, and the combined record of the teams during the week after the London-mandated bye is 12-9-1.

Coaches and front office people hate the media prognosticating easy wins in the NFL because winning a game against a supposedly weak opponent is still damn tough, but what the hell else do we have to do in April on the day after the schedule is released?

There is no reason on paper the Colts can’t enjoy outstanding results in 2015.  After three straight 11-5 seasons under Chuck Pagano, Ryan Grigson, and Andrew Luck, the Colts appear poised to enjoy a breakthrough season.  During each of those three years, the Colts have skipped to another level of the playoffs, and all that is left now is a trip to the Super Bowl.

While the Houston Texans may improve a bit in 2015, the Colts certainly are favored to beat them twice.  The rest of the AFC South should provide the Colts with another four wins, so that is 6-0.  No team in the NFC South (New Orleans, Atlanta, Tampa Bay, and Carolina) posted a winning record in 2014, so barring disaster for the Colts or wild draft related success for the opponents, that’s another four where the Colts will be favored.

The AFC East is also paired with the Colts, so the Dolphins, Jets, and Bills will join the Patriots as opponents.  The Colts should be favored in three of those games.

Denver comes to Indy and the Steelers host the Colts in a pair of tougher games.  There is your schedule.

Until the Colts beat New England, I won’t believe it should happen, and beating the Steelers in Pittsburgh is tough.

On paper, that gives the Colts a 14-2 record.  Can they lose to Denver?  Sure.  Could someone else rise up on a weird night and smite the Colts?  Sure.  No one is going to lay down and allow the Colts to roll over the top of them.

Predicting 14-2 makes me feel like an idiot because winning that many games doesn’t happen very often for any team, much less a team that has been 11-5 the last three seasons.

But I can’t find fewer than two losses on this paper schedule.