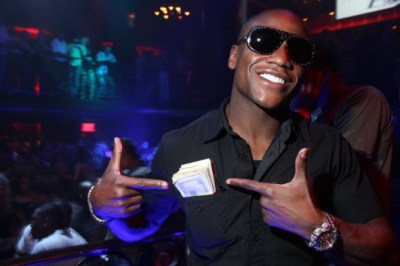 You want to fill women beater Floyd Maywether’s pockets with your cash, go ahead. I’m keeping my $100 bill in my pocket.

I have a rule about business.  Never give money or praise to people or businesses unworthy of respect.

WalMart may be less expensive, but their clothes are made by children held in virtual slavery.  They claim ignorance because they have suppliers who subcontract work to sweat shops.  I will never work for Cumulus – a media company that treats employees like livestock.  Conversely, I always buy Apple because it feels like its products were designed for me and employees at the Apple Store always treat me like I matter to them.

Dr. Mike O’Neil has been my dentist for 22 years, and I believe people’s lives are better for going to him.

I endorse products and services on my radio show because I use and believe in them.  When a company shows themselves to be unworthy of my passion, I resign the account.  My recommendation means something to me, so I hope that translates to those who listen.

Floyd Maywether Jr. will never have one dime in his pocket that used to belong to me.  Ever.  For those who have avoided the hype, Maywether is a boxer who will fight Manny Pacquiao Saturday night in Las Vegas in what is being described as a mega-fight.  This might be the final mega-fight in the history of the dying sport.

Maywether is also someone who has bettered women on many occasions.  Convicted five times for a variety of violent crimes against women, and accused many more times, Maywether has revealed himself to be a truly awful and unrepentant human being who is routinely excused from answering for his behavior because his fights mean a huge influx of cash in Vegas.

He did serve two months of a 90-day sentence after his most recent conviction, but that hardly squares the balance sheet.

I’m powerless to exact the level of consequence the legal system of Las Vegas, Clark County, and the state of Nevada have willfully neglected to enforce on behalf of his victims, but what I can do is refuse to invest cash or passion in the very activity that has allowed Maywether to elude meaningful consequence.

The cost to receive a live broadcast of the fight is $99.95, and the lion’s share of that money will go to the fighters.  The sheer lunacy that causes people to lay out a Franklin for 47 minutes of pseudo-violence between men who are in it only for the cash and not glory has infected me in the past. I have paid for fights before, but never at this level.

And never involving a fighter I find as repellant as Maywether.

Not only do I not want to watch the fight, I don’t even like talking or writing about it.  Maywether is sickening.  His existence – other than as a wonderful example of how not to live a life – is a pox on humanity, and endorsing it with my cash or interest is not a behavior I’m comfortable exhibiting.

The only reason Maywether is not incarcerated today is because of his ability to draw a crowd, and a crowd requires people.  And there will be millions of misguided boxing fans watching this fight.  It might be the biggest crowd to watch a boxing match in history, but I am going to be responsible for that crowd being one fewer and $100 lighter than it would have been with me.

Maywether can take the $180 million he will reportedly pocket Saturday, buy another garage filled with cars he doesn’t drive, keep lawyers on stand-by just in case he feels the need to teach another woman a lesson, and make seven figure bets on whatever moves him.

Here is a quick look at Maywether’s record of arrests/convictions from his wikipedia page.

In 2002, Mayweather was charged with two counts of domestic violence and one count of misdemeanor battery. He received a six-month suspended sentence, two days of house arrest and was ordered to perform 48 hours of community service.

In 2004 Mayweather was given a one-year suspended jail sentence, ordered to undergo counseling for “impulse control” and pay a $1,000 fine (or perform 100 hours of community service) after being convicted of two counts of misdemeanor battery against two women.

In 2005 Mayweather pleaded no contest to a misdemeanor battery charge after hitting and kicking a bouncer, receiving a 90-day suspended jail sentence.

On September 9, 2010 it was reported that Mayweather was being sought by police for questioning after his former girlfriend, Josie Harris, filed a domestic battery report against him. Harris accused Mayweather of battery in the past, but those charges were dropped in July 2005 after Harris testified that she had lied and that Mayweather had not battered her. Mayweather was taken into custody September 10, 2010, but was released after posting $3,000 bail. Mayweather was initially charged with felony theft (stemming from the disappearance of Harris’s mobile phone); on September 16 two felony coercion charges, one felony robbery charge, one misdemeanor domestic-battery charge and three misdemeanor harassment charges were added.

On December 21, 2011, a judge sentenced Mayweather to serve 90 days in the county jail for battery upon Harris in September 2010. Mayweather reached a deal with prosecutors in which he pled guilty to misdemeanor battery in exchange for prosecutors dropping the felony battery charge. Mayweather also pled no contest to two counts of misdemeanor harassment, stemming from threats to his children. In addition to the 90-day sentence Mayweather was ordered to complete 100 hours of community service, a 12-month domestic-violence program and to pay a fine of $2,500. On June 1 Mayweather began serving his county jail sentence, and was released in August 2012.