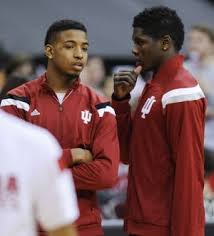 Devin Davis and Hanner Mosquera-Perea are gone from the Indiana Basketball team. Maybe the inmates are no longer running that asylum.

Screws have been loose in Bloomington for a long time on Indiana University’s men’s basketball team, and finally – at long last – efforts were made yesterday to tighten them.  Junior Devin Davis and senior Hanner Mosquera-Perea were dismissed from the team for an embarrassing aggregation of offenses.  The final straw was the citation for possession of less than 30 grams of week that was issued to Davis on Monday while Mosquera-Perea was in the room.

Coach Tom Crean either grew the stones needed to assess meaningful consequences, or was handed them by athletic director Fred Glass.  Regardless of the source of the hammer, it’s good that one finally was swung toward entitled and enabled players who have treated the privilege of playing basketball at Indiana with indifference for too long.

Over the past 15 months, two Indiana basketball players have been arrested for using fake IDs as they tried to gain entry to Kilroy’s Sports on Little 500 weekend, two more were suspended for multiple positive drug tests, another was arrested for driving while intoxicated, yet another suffered a fractured skull as the result of jumping on an SUV being driven by different player, who was then arrested for driving after doing while being underage.

In a vacuum, all but the DUIs would be seen as nothing more than college hijynx gone awry, but combine them and add the responsibility basketball players accept when they sign on to represent the university as its most important marketing arm, and you have a serious problem.

With each incident, Crean appeared less and less capable of building a culture of respect or even obedience.  Whatever the disincentive, the players’ behavior revealed them as ineffective and weak.

As at least half the roster continued to act like idiots, they revealed apathy toward Crean’s ineffective assessment of punitive countermeasures.

Things devolved so completely last Fall that the team was addressed by Glass, a man whose job responsibilities do not and should not include hands on management of student-athletes.

And now, finally, a message has been sent that Indiana Basketball isn’t a country club where the inmates run the asylum.  A line is crossed, and the privilege of playing basketball at Indiana is removed.  The players who don’t listen now are beyond help.

It would have been a lot easier for Crean had he run off an important player earlier to show that he’s capable of lowering the boom regardless of talent, but these expulsions can begin a new era of authority returning to the guy paid handsomely to run the program.

Not only will the wayward players still on the Indiana roster benefit from knowing that Crean and/or Glass are more than willing to impose their will because of a weak moment leading to a bad choice, the players who toe the line will respond positively as well.

There are few things more annoying to a kid who does all the right things than a guy who is never penalized for doing all the wrong things.  Enthusiasm wanes, play suffers.

Crean and Glass stepped up yesterday.  In business terms, they made the tough decision to fire two employees who had shown repeated disrespect for Indiana University through their irresponsible and immature actions.  Easy call.

This recalibration of discipline was long overdue, but in time to keep the entire ship from sinking.

Maybe now, Indiana Basketball will be played by adults because the coach finally acted like one himself.