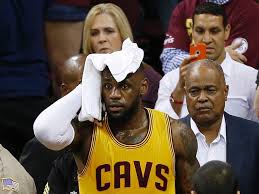 The baseline is unsafe because of cameras, so LeBron James cut his head in Game Four of the NBA Finals last night.

Based upon the accommodations made to the ESPN during coverage of professional sports, you would think the the Mothership runs sports.

You wouldn’t be far off, and it will take ESPN’s endorsement for the right thing to do done – move photographers and cameramen off the baseline during NBA and college games.

ESPN pays a ton of cash to the NBA and college conferences and schools for the rights to broadcast basketball games as they see fit, and how they see fit is to encroach upon the playing area with men and women wielding bulky cameras with sharp edges.

Last night, the best basketball player in the world, LeBron James, was fouled and fell into the area immediately beyond the baseline.  His head came in contact with a camera causing a serious gash which required stitches in his scalp.

That it doesn’t happen more other is a miracle.  I’ve sat along the baseline among the photogs, and constantly feared referees and player might trip over my feet.

For that reason, the proximity of the players to the photogs is unlikely to be addressed unless a player like LeBron slices a vein on a lens and bleeds to the point of unconciousness.

It’s unfortunate that the safety and welfare of the players and effect it can have upon basketball is never considered.

Randy Newman recorded a song almost 30 years ago called, “It’s Money that Matters.”  It might be the truest and saddest song ever recorded.