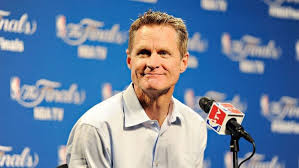 Steve Kerr tells the truth about lying and the media goes bananas!

Kerr was asked prior to the game whether Andre Iguodala would start the game, and said that he would come off the bench.  Iguodala started, and some members of the media are outraged.  “What’s the point of pregame press conferences if a coach won’t tell the truth?” they ask.

Good question.  There is no point to those inane media availabilities because there is no chance a coach is going to reveal the way he will deploy his players or mount a strategy to a bunch of knuckleheads with microphones.

Anyone in the media expecting the truth about strategy from a coach is an idiot.  When we talk to NBA general managers about the upcoming draft, questions like this are asked, “Are you leaning one way or the other about Willie Cauley-Stein?” and “Are you going to draft to need or the best player available?”  Expecting the truth is an insane reach of misplaced faith, and everyone knows they are going to get blather in response.  The media are there because it’s their job, and the teams hold the presser because they like the coverage.

Being lied to is what reasonable media members expect from coaches.  We say that we want the truth from players, but when we get it, KABOOM!  When players say what’s really in their heads, the media make them pay dearly for it.  Every once in a while the media comes across a guy who lies charismatically, and he is beloved.

Providing the opposition with honest answers and a competitive advantage through the media should be grounds for dismissal for a coach.  The criticism by the self-important media is ludicrous.

Kerr’s only mistake is in being such a good guy that he admitted to lying.  He could have continued to lie and said the decision was made just before the tip, but just he’s too honest to lie about lying.

And we find yet another reason to like Steve Kerr.