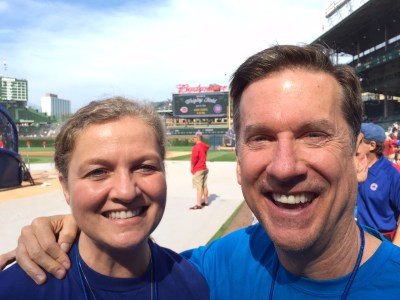 So get this – we arrive at our hotel in downtown Chicago seconds ahead of a busload of Reds fans, so checking in takes two minutes instead of an hour.  The Red Line train is waiting at the Chicago Avenue station as we do.  As we settle in at the Cubby Bear, I get a call from my guy with the Cubs who is going to escort us onto the field saying the time of our visit has been moved up 50 minutes, and we need to be at the ballpark right then.  When we get to the bleachers, Cubs pitching coach Chris Bosio throws a ball toward us.  A couple of guys bobble it, and I catch it.  Even better, the little boy to whom I would have given the ball had already been given one.

But I skipped the embarrassing part.  You knew there had to be an embarrassing part, right?  While we were on the field during batting practice, a Reds player came back to the fan area to talk to friends.  He was a white guy who wasn’t Todd Frazier, and so I assumed it was Joey Votto.  I stuck out my hand aggressively toward the player, and said, “Thanks, Joey.  I appreciate it!”

Generally people respond positively to being thanked, and that was the case with this guy.  He shook my hand, but appeared confused in the way that communicated that he was not Joey.  Sadly, it was Jay Bruce.  I moved along quickly, and my wife shrugged as a silent apology.

This wasn’t the first time I screwed up mistaking one Red for another.  At my very first Cubs game, my Dad handed me his scorecard, pointed toward the field, and told me to go get the Reds player’s autograph.

There were two Reds players standing about 10-feet apart.  There was a small crowd around one of them, and no one around the other.  Even as a tot I was a big fan of efficiency, so I walked up to the lonely Red and asked him to sign the card.  He was happy to.

When I returned to my Dad, he was laughing and shaking his head.

I had watched a lot of Cubs baseball on TV, but TVs weren’t then what they are today.  HD was 30 years away, and our family TV was black and white.  So it was understandable that I asked Fred Whitfield for his autograph instead of Pete Rose.

There is no excuse today for mistaking Jay Bruce for Joey Votto, but what’s a trip to Wrigley without an embarrassing interlude.

Rain came, but it was very close to the start time of the Stanley Cup Finals game between the Chicago Blackhawks and the Tampa Bay Lightning, so we were able to roll to a predictably crowded bar to watch.  As we walked in, a table for four opened up.

A little later, I hopped a cab back to the hotel to safely store the swag from Wrigley – four Joe Maddon bobbleheads, some ill-gotten dirt from our on-field visit, and the Bosio ball – and heading north on Michigan Avenue while the cab drove south was a group of 1,000 naked bicyclers.  Some were in underwear, but most were all-nude.

Some should not have been naked, but most were in reasonable shape.  Still, rather than enjoy the sights of the late night naked bike ride, I thought about how it would be impossible for me to use the bike seat again after sitting on it without some kind of separative device keep my ass from coming in direct contact with it.

Did I mention my wife and I were celebrating our anniversary with great friends who will remain anonymous to protect the innocent?  That is as good as a day can get.  There was nostalgia, humiliation, nakedness, victory, laughter, theft, good luck, and wondrous efficiency.

Chicago without waiting is the best city to visit in the world!