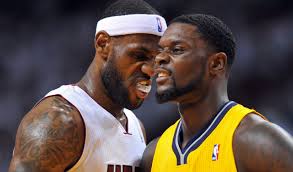 It’s been just over a year since Lance Stephenson was a relevant force in the NBA.

How long do you think it took for Charlotte Hornets owner/operator Michael Jordan to realize he screwed up by signing former Indiana Pacers guard Lance Stephenson to a three-year, $27 million deal?  My guess is three days.

Lance is a lemon – that car that looks great on the lot, and that men decide to buy despite knowing better, much better.  For the first day, you are proud to have thrown caution to the wind by making such a manly purchase.  You spend the second day rationalizing and arguing with your better self.  The third day, you resign yourself to the reality that you are a moron.

There was likely a similar dynamic that attacked Stephenson’s conscience.  He could have signed a longer deal worth $26 million more in guaranteed money to stay with the Pacers – a team that made allowances for his quirks and put him in the best position possible to succeed.

He decided the grass would be greener in Charlotte.  It wasn’t.

Now he’s a problem for the Los Angeles Clippers, the team that traded Spencer Hawes and Matt Barnes to Charlotte for him.  Clippers coach Doc Rivers is a smart guy who might have better luck with Stephenson than did the Hornets, and he better.

Hornets coach Steve Clifford benched Stephenson for the last five games of the season, and it was clear that he was unwanted cargo in Charlotte moving forward.

Many were surprised the Pacers worked as hard as they did to retain Stephenson a year as he was an unapologetic stat stuffer who was tolerated among teammates as a disconnected but talented little brother.

Like a foster child prone to unpredictable behavior, it appears Stephenson’s career will feature many addresses.