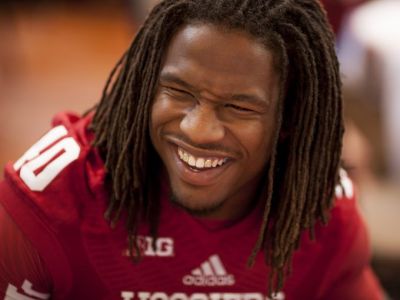 If the charges reflect reality, Antonio Allen’s days as a Hoosier are over, and his arrest may create a wake that requires other tough decisions.

College students tend to be dumbasses who test societal boundaries.  That’s a big part of a college education – learning where the third rails of life are.

At Indiana University, athletes lately aren’t doing a very good job of learning the lessons that will not only allow them to thrive as adults, but remain free men.

The latest arrest came yesterday, and it wasn’t some role player who got popped for illegal consumption.  This was safety Antonio Allen, a junior who led the Hoosiers in tackles last season, being charged with dealing heroin and cocaine – class 2 felonies for which he could be sentenced to 10-30 years.

Over the past couple of months football players defensive tackle Ralph Green III and wide receiver Isaac Griffith were also arrested and suspended from the team.

Ironically, according to David Woods piece on indystar.com, Allen posted a pic of himself on the cover of the Big Ten Preview magazine on his instagram account prior to his arrest yesterday with the caption, “If you knew (where) I came from and all the trouble I was in when I was younger you can see I did a 360 and I am BLESSED thank you GOD”

The Indiana basketball program was forced to deal with two repeatedly wayward personalities last month when they kicked both Devin Davis and Hanner Mosquera-Perea off the team.

We tend to judge basketball more harshly because there are only 13 players on scholarship, while the football coaches need to monitor 85 scholarship athletes plus walk-ons, but when your best defensive player is arrested for dealing horse, coke, and meth, something is wrong with the program.  That this follows on the heels of Green’s arrest for battery, public intoxication, and disorderly conduct as well as Griffith’s DUI, reasonable people can begin to question the culture nurtured by head coach Kevin Wilson.

Couple football and basketball’s recent legal issues, and questions can be asked about the entire department.

“Kids will be kids” can be claimed when athletes are cited for using fake IDs.  Damn near every kid in college has a fake ID.  That kind of arrest is part of college life.  Selling heroin, DUIs, battery, etc… are not.

Either the evaluation of athletes at IU is not exhaustive enough, or the coaches are willing to take a chance on a great athlete/troubled kid.  Regardless of which it is, a change in the protocol for inviting student-athletes to represent Indiana University in its two most visible programs needs to change.

For God’s sake, it’s not like Indiana is a national championship contender – it’s the losingest program in the history of D-1 football!  The very least Indiana Football can do is lose with good kids.  Losing with a smack dealer starting at safety is something even the apathetic IU football fans can muster a little rage over.

As Wilson enters the fifth year of his seven-year contract, the time is coming for athletic director Fred Glass to become serious in his evaluation of the work Wilson has done in rebuilding the moribund Indiana football program (google “moribund” and IU football is listed as an example of the word’s proper use).  The Hoosiers have made positive steps, and until the past three months were behaviorally trouble-free, but heroin dealers roaming the defensive backfield for the Hoosiers is a problem for which there may be no easy solution.

4 thoughts on “Indiana Football – Three arrests in three months, the latest for dealing heroin and coke”