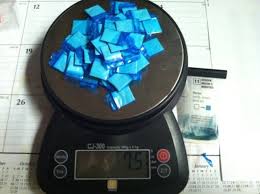 A lot of people have worked hard to re-brand Indiana Football, but this morning heroin on a scale defines Hoosiers on the gridiron.

Our society rewards wealth, so there are plenty of reasons for those without any clear path to the trappings of financial fortune to wander into the entrepreneurial death trap of dealing meth, heroin, and cocaine.  But for an athlete who had a legitimate shot at playing in the NFL, an arrest for dealing those drugs in baffling.

Antonio Allen led Indiana in tackles last year as a sophomore safety.  He was one of the few bright spots on a bad defense, and had a bright future.  All that vanished Tuesday when he was arrested for class 2 felonies that could land him in prison for 10-30 years.

Indiana is without a safety, and the coaches who trusted him with a scholarship look like morons for harboring a criminal who was dealing narcotics barely one block from the stadium where they tried and failed to provide a positive influence on his troubled life – a life now defined by the short-sighted decision to profit from the disease of addiction.

Because this is the third arrest of a football players in three months, questions are being asked about Kevin Wilson’s leadership that have nothing to do with wins and losses.  That’s not good for Wilson.

Losing is a part of the fan experience for Indiana alums.  Minus the half decade from 1987-1993, the 1979 Holiday Bowl season, and the Rose Bowl year of 1967, Indiana has been relentlessly mediocre to terrible back to World War II.  That’s okay.  Going back to Bloomington for a game is a trip back in time with tailgating just as it was in the 1970s and 1980s, some disappointing football, and then a strom and bucket (or six) at Nick’s.  Nice day.

Would it be better if Indiana won?  Sure, that would be nice, but not necessary.

What is an absolute must for Indiana alums and fans is that we are not forced to take crap from co-workers about drug dealing, woman beating idiots who shame the university while also losing.

Allen and the other two arrestees have made that impossible for the foreseeable future.

I enjoy Saturdays in Bloomington, having attended every home football game for the last two seasons.  I even drive down to Bloomington every Monday for the media availabilities so audio with Wilson and some of the players can be shared with listeners to my radio show.  I know virtually no one is emotionally invested in Indiana Football, but I want the program to succeed so I try to paint a picture of potential success for those who run the program.

After reading David Woods coverage of the Allen arrest on indystar.com, my question was why does Indiana University continue to field a team?  What’s the point of this charade?  They seemingly can’t win, and the players care so little about the branding of the program that they are routinely arrested – and not for prank type crimes, but for battery, DUI, and dealing heroin.

A team that was supposed to be improving step by step is now not known for the work being done in the weight room and classrooms to create that positive momentum.  It’s defined by the three young men facing serious charges following their arrests over the past three months.

It’s unrealistic to expect 85 scholarship athletes to behave perfectly for their four or five years in Bloomington, but the last three arrests weren’t for the mischief we equate to college students still blissfully unaware of the consequences for indulging in out of whack priorities.

Dealing heroin is different, and right now, that’s what alums, fans, and media think of when they see the IU logo.

It’s a sad time for Indiana Football fans – and that’s saying something.

8 thoughts on “Indiana Football – Losing I’m used to, but losing with heroin dealers is a new low”