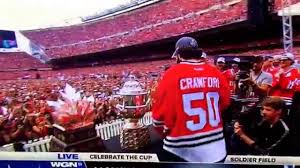 The Chicago Blackhawks won the Stanley Cup earlier this week, and during yesterday’s celebration goalie Corey Crawford dropped an f-bomb during his remarks.  This is the second time he’s done it, having been moved to shriek that dreaded obscenity during the previous Hawks Stanley Cup party in 2013.

Some people in Chicago are outraged, and others were thrilled that Crawford spoke their language.  America continues to loathe those who violate their sensibilities by swearing, and it’s ridiculous.  Crawford yelled ““F—-n’ right, Chicagooooo!”  The world kept spinning, the wind kept blowing, no one died or was injured in any way, and our lives are unchanged.

People hate, kill, drink and drive, sell drugs, fight in WalMarts, and generally make a mockery of the myriad of positive opportunities available to humanity, and we are outraged at a happy guy swearing at a party?

Tiger Woods shot 80 yesterday in the first round of the U.S. Open at Chambers Bay in University Place, Washington, and it was an ugly 80.  People are saying he’s done winning majors, and I have been among them since he entered a rehab facility to become a better father, husband, and man.  Tinkering with the hard drive made Tiger a better man, but a much worse golfer.

Part of Tiger’s mojo was in his indifference to humanity.  This was his world, and trophies were his to claim.  No one was better at winning, but Tiger was taught there is more to life than winning.  His body began to fail him, and his psychological edge was whittled away through his embrace of sanity and empathy.

If Tiger wins again, it will be because enough good things happen on Thursday that Tiger is reminded of who he was, and for a brief time will be able to trick his mind and body that he’s Tiger Woods again.  These things tend to happen only one more time in a champion’s career.  Tom Watson in the British Open a few years ago, Greg Norman also at the British, Jack Nicklaus in the 1986 Masters come to mind as examples.

He’s done as a champion golfer because the price required for him to compete at the highest level is simply too high for a sane man to pay – and Tiger is now too happy to allow himself to backtrack into that life.

The Indiana Pacers will select 11th in the 2015 NBA Draft six days from now (barring a trade), and mock drafts suggest the Pacers will take Willie Cauley-Stein, Frank Kaminsky, Cameron Payne, or Myles Turner with that pick.  When was the last time the Pacers behaved in a draft as others predicted?  I can’t remember a single time in the last 20 drafts when experts got the Pacers pick right.

You take those four players, I’ll take everyone else, and you name the stakes.

Kyle Schwarber is raking like an all-star through two starts as a Chicago Cubs designated hitter, but because he isn’t ready to be a major league catcher, he will be sent down to Iowa at the end of this road trip.

The opposite field home run last night showed the tremendous bat speed the Indiana University product can generate, and he either scored or drove in every run the Cubs tallied in the 4-3 loss in Cleveland.

A fan base that has waited 106 years between championships should be able to muster another nine months of patience for the latest young position player who can flat out hit to report to Wrigley Field, but I refuse.  Keep Schwarber with the Cubs – let him catch everyday.  Learn the finer points of that position while launching rockets across Sheffield Avenue.