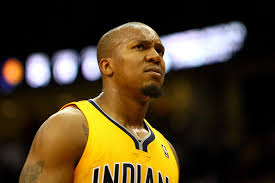 David West was a pro’s pro who will no longer be a Pacer, but that isn’t necessarily bad news for the Pacers or West.

Fans assumed that David West would opt to return to a team with a healthy Paul George and whomever is selected #11 in tonight’s NBA Draft.  In the weak Eastern Conference, the Pacers are seen as a threat to go to the NBA Finals, and West supposedly craves a championship.

It didn’t happen.  West has decided to head elsewhere to either pursue a ring or make the savvy business decision to stuff his pockets with some extra late-career cash.

West’s value will never be higher than it is right now.  At the age of 35 when the season starts, West is nearing the end of the line, and was scheduled to earn $12.6 million this season.  As a free agent next season – at 36 – he would be seen as irretrievably old and not worth a flyer by a team that might be a savvy power power forward away from a title run.

Coming off a season that wasn’t nearly as bad as fans might have thought, West might be in position to receive a three-year offer worth $18M-$25M.  Because $18M is more than $12M, West might net more out of that deal than he would have by grabbing the $12.6 owed by the Pacers if he had opted in.

West scored less than any year in his career, but his rebounding stayed at his typical level as a Pacer, and he assisted better than any time in his career.  His defensive rating in 2014-2015 was exactly the same as during his first season with the Pacers.  West’s value over replacement was also identical to that of his 31 year-old self when he relocated to Indiana.

There is always the chance that West will restructure his deal to return to the Pacers, but that seems unlikely given comments from those reported to be close to West.

If West is indeed gone, that leaves the Pacers out one soon-to-crumble rock, but plus $12.6M in cash with which they can pursue free agents this offseason.  The salary cap is expected to increase to $67.1M for the 2015-2016 season, and the luxury tax threshold will be approximately $81.6M.  With West’s cash removed, the Pacers payroll is at $51.3M.  If Hibbert leaves, the Pacers payroll will drop to $35.8M.  Aggression in free agency will give the Pacers the means required to rebuild quickly.

With tonight’s draft, the Pacers may add a couple of pieces to the roster that will be both affordable and productive.  This is a strange draft, filled with not much great but teeming with very good.  At #11, the Pacers will likely have their choice of four or five players in whom they have great interest, according to yesterday’s comments from general manager Kevin Pritchard.

And that’s if the decision is made to stay at #11.  There is rampant speculation that the top half of the first round might feature an unusual level of wheeling and dealing.  Moving up or down will be options for team president Larry Bird.

Regardless, the front office of the Pacers should finish its work feeling better about the prospects for a successful 2015-2016 season than they do right now.

West was a piece of the puzzle, but the timing may be exactly right for an infusion of youth to help the Pacers become faster, more versatile, and less psychologically fractured.  West was a consistent professional during his time with the Pacers, and his presence will be missed, but with his departure there is an opening for something different and the hope that it might represent an opportunity for improvement.

This news of West opting out isn’t just a matter of a solid pro leaving, but of $12.6M being available to spend on a player that can help the Pacers more than a 35 year-old power forward, regardless of his professionalism.

It’s also about West having a chance to make more money in the aggregate than the $12.6M he would have been owed by the Pacers.

Yesterday’s news could be a win-win for the Pacers and West.