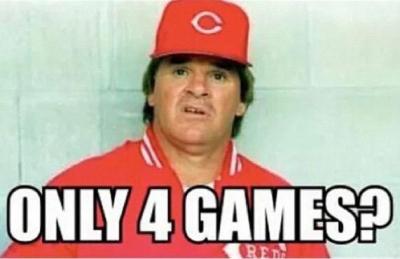 Tom Brady was found to have cheated. Pete Rose never cheated, so why will Brady get a break while Rose can’t. It’s all about cash.

It was always unlikely that Pete Rose’s lifetime ban from baseball would be lifted, and since New England Patriots owner Bob Kraft agreed to accept the penalties levied against his team without complaint, a reduction of quarterback Tom Brady’s four-game rip has been a fate accompli.

Baseball has nothing to gain financially from reinstating Rose, and the NFL would be vulnerable to an expensive court challenge if Kraft were motivated to violate its charter with the NFL by initiating an ugly court fight over a loss of a couple of draft picks and $1-million.  The biggest star in the NFL being lost for any period of time would also hurt the league and Patriots financially.

Rose had recently received a more substantial amount of support than at anytime during his lifetime suspension, and the timing of the release of a notebook that contains evidence linking Rose to betting on baseball as a player (not manager, as he has already admitted) is definitely suspicious.

Baseball only wants Rose back during occasions from which they can profit from his presence.  Forgiving Rose in the name of profit they can stomach.  Being forgiving, understanding that even arrogant human beings like Rose are flawed and can be deserving of a second chance gives baseball nothing it didn’t already have, and was never going to happen.

Brady is still the face of the NFL, and the initial four-game suspension followed by a reduction or elimination of the suspension gives the NFL what it craves – a public persona of an organization that won’t tolerate cheating, and the deployment of all marquee assets at or near the beginning of the upcoming season.  Forgiving hard-ass is a sustainable position for Goodell.

The dichotomy of the two cases and the difference between their arcs speaks to the difference between being a player and a former player.  It underscores the reason for the difficulty many pro athletes experience in retirement.  Sports organizations will accommodate almost any level of idiocy, malfeasance, or moral turpitude as long as value can be gained from it.  Once a player lapses into former player status, the escape portals provided by teams and leagues are no longer accessible.

Bad behavior that was met with a blind eye is suddenly revealed for all to see.  Rose was always arrogant beyond reason as a player, but his exploits were tolerated because his presence meant cash at the gate and a bump in TV ratings.  Once his value eroded, baseball stepped in to make set an example.

Brady is still a very valuable asset for the NFL, so Roger Goodell will lord over the appeal proceedings beginning today, appear to be a high-minded good shepherd for the integrity of pro football, and then do what is good for business – as he always does.

All we needed to know about Goodell and his cronies was revealed less than a year ago when his office suspended running back Ray Rice for only two games for knocking his fiancee unconscious in that casino elevator, and then stepping over her like a sack of dirty laundry.  The public went haywire, and Goodell recalibrated his response.  Rice playing at all is bad for business, so he isn’t.  It never had anything to do with moral outrage.  It’s all about cash in professional sports.

Rose coming back to baseball or being inducted into the Hall of Fame is good for Rose, but not for baseball, and so Pete sits on the outside looking in.  When it suits baseball’s business interests, like during the upcoming All-Star Weekend, the commissioner makes a big deal about generously allowing Rose back in the ballpark as though it’s out of the goodness of his heart.  Yeah, okay.

These two situations have one thing in common – they are both charades.