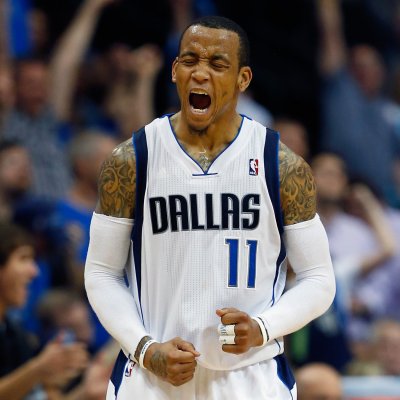 Monta Ellis would make the Pacers better, but exactly how much is the question.

Ten-year NBA veteran Monta Ellis is reportedly talking to the Indiana Pacers today about coming to Indy as a free agent.  There are reasons for the Pacers to be interested in signing Ellis, and a few for fans not to see him as a magical elixir that might allow the Pacers to earn their way back to the Eastern Conference Finals for the third time in four years.

Here are five reasons to be excited about Ellis as a free agent:

1 – Very aggressive offensively; lightning quick first step.  You can’t teach quickness, and Ellis’s calling card over his decade in the NBA has been a first step quick enough to keep good defenders on their heels or behind him.

2 – Great finisher around the basket.  Ellis is an attacking combo guard who can create his own shot – a definite weakness for the Pacers over the last three seasons.

4 – If Rodney Stuckey leaves, Ellis is an upgrade.  As much as Stuckey was a feel good story for the Pacers last season, his productivity – especially shooting threes – was out of whack with his previous self.  During a season when Stuckey was determined to rehab his reputation, he might have been the best possible version of himself.

5 – Has missed a total of two starts in three seasons for the Bucks and Mavericks.  Predictability would be a nice change for Frank Vogel, whose expected starting lineup of George Hill, C.J. Miles, Paul George, David West, and Roy Hibbert missed 45.4% of their possible starts.  Given that West is gone and Hibbert is unlikely to start, according to Pacers president Larry Bird’s remarks in his postseason press conference, and those two missed only 22 of 164 starts, someone who can be counted on to suit up every night is a good thing.

Here are five reasons to view Ellis as a flawed and expensive band-aid for a team in transition:

1 – Not a great defender – Ellis’s defensive rating has averaged 107 over last four seasons; George Hill’s has been 103 (lower is better).  There are factors outside Ellis’s control that can affect that number, but over four seasons, it provides a solid snapshot.  He will cost more than Hill, but not yield the same results.  While Ellis is seen as a very productive offensive player, he pales again in comparison to Hill.  Ellis’s offensive rating has been 100 in three of the last four years while Hill’s has been 117 three of the last four years.

2 – Best historic comp, according to basketball-reference.com, is Kyle Macy.  Kind of speaks for itself.  Paying eight figures for all-star level players is fine, but Ellis being statistically closest to Macy is not a result’ builder.  Now, a lot of what makes those two similar occurred early in Ellis’s career, but still.

3 – He’s a poor man’s George Hill who will cost more than Hill.  Both are roughly the same size, but on both ends of the floor Hill is the better player, and his cost is $8 million per year.  Despite playing three fewer seasons, Hill’s career value over replacement is 41.8 while Ellis’s is 36.6.  His career offensive (24.4 to 20.1) and defensive (17.4 to 16.5) win shares outstrip Ellis’s as well.  Players know who makes what, and Ellis outlearning Hill might cause issues.

4 – Has been on a team that won a playoff series exactly one time in ten seasons.  And that was in 2007.  The Dallas Mavericks lost to the Houston Rockets for several reasons a couple of months ago, but none of them had much to do with Ellis, who was outstanding.

5 – Is likely to cost more than his value.  While Stuckey is not a better player, he is certainly a better value.  Stuckey was paid just over $1-million last season, while Ellis is likely to cost the Pacers more the $30-million over three years, according to multiple reports.

Ellis fits well the slot left by Lance Stephenson, who would have been paid $9-million a year for five years had he made the sensible decision and excepted Bird’s offer a year ago.  Bird plugged the hole short term with Stuckey and Miles, but injuries never allowed the planned rotation to congeal.

The Pacers would certainly be a better team with Ellis’s addition, but whether he can be a meaningful piece of a championship puzzle is the cogent question that Bird needs to answer as he evaluates Ellis.