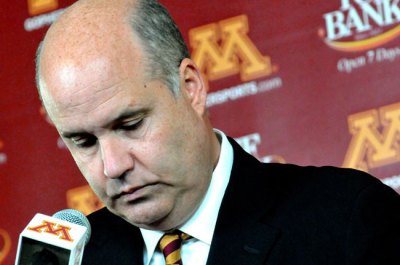 If this guy drove a bus, do you think eyes would be drawn to him in a Minneapolis or St. Paul bar? Former Minnesota AD Norwood Teague should have understood what that means.

Until last Friday, he was the athletic director at the University of Minnesota.  Teague resigned that day because some bizarre and aggressive texts he sent were shared with his employer and then the media.

Success and wealth have a way of corrupting the common sense that keeps most men from becoming scourges of society.  Rule #1 for a guy is to know who you are, and what you have become should not be confused with who you are.

As we mature some of us excel, amassing status and wealth.  There is evidently an overwhelming compulsion among many who were not blessed with the physical and/or behavioral charms necessary to step up their game with hot women once wallets are fat and resumes are impressive.

This seems to be the case for Teague, who appears to have aggressively pursued a number of women uninterested in his masculine wiles, including a journalist for the Minneapolis Star-Ledger.  Amelia Rayno is the paper’s beat reporter covering Minnesota’s basketball team, and the first person report she authored Sunday night of a night spent with Teague 20 months ago paints a picture of a guy with no idea how to communicate with or read the signs – like Rayno leaving a bar and hopping into a cab – a woman sends.

Here’s a very useful tip for guys seeking women – the women hold all the cards and they will determine the pace of play.  Trying to assert your will over any woman – wife, girlfriend, stranger – is an exercise in futility.

Another sad but true rule is that if your name is Norwood, the cards are stacked against you with the ladies from birth.

And if you are in a position of power with a measure of fame, people will remember your behavior when you are at your best and at your worst.  Journalists are especially good at taking notes and recalling oddly curious acts of social awkwardness.

Teague believed that because he became the athletic director at Minnesota people liked him and he mistook the attention his position commanded for actual charisma and physical giftedness.  This had uh-oh written all over it from the start.

It bears mention that Teague has asserted that his acts of sexual harassment seemed to occur when he had been drinking.  Another great rule for guys is that we do not become more attractive after drinking for a couple of hours, and the bravery that comes with intoxication almost always results in rejection – and for good reason.

Women know what they want – and who.  Overtly extending yourself in their direction is a waste of time and energy.  Just like an exclusive club, it’s always better to wait to be invited, especially if you are a 50 year-old bald guy interested in someone younger and hotter.

And if you think the job title on your business card is your ticket to playing with the cool kids, you will be disappointed with the level of people it attracts.

Teague is the latest cautionary tale for men who missed out on the fun of popularity when young but now think they can make up for lost time and opportunities through professional achievement and prominence.

Norwood Teague forgot who he was, and thus lost what he became.