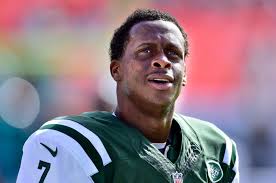 Some teams are supposed to lose, and the Jets are very near the top of that list.

New York Jets starting quarterback Geno Smith was punched in the face yesterday by a teammate, and his jaw was broken.

Smith will be out for the next six to 10 weeks and the guy who threw the punch is unemployed as the Jets try to gear up for a better season than the 4-12 stinker they crapped out last year.

While the Indianapolis Colts win 11 or more games a season like it’s the franchise’s birthright (10 times in the last 12 seasons), the Jets have won as many as 11 games just twice in the last 29 seasons.

The difference between the Jets and the Colts runs far deeper than a locker room fracas over the $600 Smith owed the linebacker who threw the punch – it’s a matter of consistent focus and diligence which leads to a cultural excellence.

A teammate punching Colts quarterback Andrew Luck is beyond impossible to fathom.  Not that the Colts don’t have their occasional disagreements, but protecting Luck on the field is such a relentlessly cited priority that a Colt attacking him off the field is inconceivable.

Either your team is about winning or it’s not.  Either it’s a group of nearly 100 men this time of year committed to presenting their best selves, all with an laser focus trained on team success, or it isn’t.

It’s not just the luck of owning the #1 pick in the NFL Draft at the exact moment franchise quarterbacks who embody and communicate a winning culture are available that has allowed the Colts to roll on with seemingly unending excellence, it’s a commitment to making the right decision at the right time, and avoiding an atmosphere where the wrong decision is made at the wrong time.

In 31 locker rooms, professional football players did not need to be reminded that breaking the jaw of their starting quarterback is a bad thing.  With the Jets, no message could have been more important for first year coach Todd Bowles to impart.  For winners, teaching the nuances that lead to success is a priority.  For losers, the most obvious lessons go unlearned and unheeded.

The Jets, Browns, and Rams are losers.  The Colts, Steelers, and (gulp) Patriots are winners.  That’s not physics, but it’s close.  And the biggest difference isn’t talent.  Talent isn’t enough.

Those teams and businesses that show up everyday committed to the same mission generally win.  A broken jaw is stark evidence of a losing culture.  Luck’s boundless enthusiasm for football and Pagano’s mantras of process over result are almost as obvious a predictor of success.