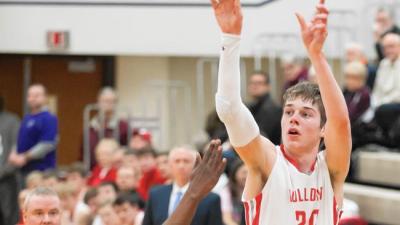 Crown Point’s Grant Gelon’s dream to be a Hoosier is going to come true next year.

This is the kind of story I never get tired of telling, but was unsure I would get the chance to tell again.

An Indiana high school player overlooked by many of the bigger programs dreams of playing for the Hoosiers impresses the IU head coach, gets an offer, and accepts it after discussing it with his parents for all of a couple of minutes.

In 49 states, this story might end in disappointment, but this is Indiana where kids shoot tiny basketballs at Little Tykes rigs as soon as they can stand.  The reason this story has a good chance at ending happily for all concerned is the same as the explanation for how ‘scrappy’ Indiana teams go to summer tournaments and beat national powers filled with top 20 ranked talent.

Indiana kids know how to play winning basketball, and by “Indiana kids”, I’m not imposing geographic limits.  I’m talking about hoops savvy – the ability to diagnose and attack instinctively on both ends of the floor.  “Indiana kids” have it whether they live in Indiana, Illinois, or Croatia.

Grant Gelon of Crown Point visited Assembly Hall Wednesday, Tom Crean offered him a scholarship, and before he left Assembly Hall, Grant told his future coach, “I want to be a Hoosier.”

For those of you who allow yourselves to be excited about a basketball player who knows what Assembly Hall is and what Candy Stripes look like before showing up for his first workout in Bloomington, Grant’s story gets better.

“I was down in Bloomington visiting my sister and we went to Assembly Hall,” Grant told me on my radio show (3p-6p weekdays on CBS Sports Indianapolis).  “They had a practice going on, and I couldn’t get in there to sneak a peek because the doors were all locked.  It’s kind of cool that I was trying to get in there last year, and now here I am.  It’s kind of amazing.”

During a time when some high school players are jaded after years of being pampered and treated like they are special before doing anything meaningful, Grant’s excitement in telling the story of what happened Wednesday night is a welcome change, “We were talking to Coach Crean and he was explaining where I would fit in the program… IU had a scholarship and they would like to offer it to me.  It was just so fulfilling.  It was just everything I could have imagined it being.  It was nerve-wracking, but after I said ‘I want to be a Hoosier,’ it just felt great.

“I’m excited to get my hands dirty and get to work.  I know I’ve got a lot to work on, but I’m ready to put in the time and the effort.  I’m an Indiana guy from the Region, and it just couldn’t be a better fit for me.”

That goes both ways.

Grant Gelon likely isn’t the second coming of Steve Alford, Randy Wittman, or Calbert Cheaney, but he’s a shooter willing to defend who’s damn excited about being a Hoosier.  That’s enough for me.

Here’s the full interview with Grant from my show: