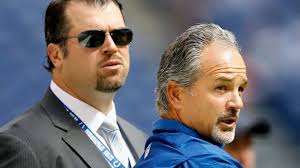 Ryan Grigson and Chuck Pagano need to act like the unselfish and reasonable men they portray themselves to be.

Can’t we all just get along?

I get it if one guy is a moron and another is gifted.  Two people in upper-management with completely different skill sets or abilities are likely to butt heads – and often.

Both Colts general manager Ryan Grigson and coach Chuck Pagano appear to be competent.  Neither is perfect – Grigson traded a first round pick for a fat running back who couldn’t find the hole with a map, and Pagano couldn’t stop any part of the Patriots attack in that 45-7 debacle of an AFC Championship.

As a team, Pagano and Grigson have managed three straight 11-5 seasons and moved one step closer to the Super Bowl in each year they have been paired as leaders of the Colts.  No Lombardi Trophies, but this hasn’t been a miserable excursion through rebuilding either.

Despite denials by owner Jim Irsay and joint media appearances by Grigson and Pagano, reports by real journalists like CBS Sports Jason La Canfora continue to swirl that Grigson and Pagano have great difficulty working together and that regardless of the resolution of the 2015 season Pagano will either walk out the door or be pushed through it.

This is eerily reminiscent of the narrative that played out over the last year with the Chicago Bulls.  Tom Thibodeau was the coach who drove the Bulls front office crazy while also being unable to get the Bulls to the NBA Finals.

The Bulls were hamstrung by a rash of injuries, including recurring knee issues for former NBA MVP Derrick Rose, and still under Thibs the Bulls averaged 51 wins during his five-year run in Chicago.

Relentless success under difficult circumstances wasn’t enough to save Thibs from an ax wielded by Gar Forman and John Paxson who yearn for more.

The primary difference between Pagano and Thibodeau is that the players reportedly loathed Thibs while they love Pagano.  That’s a big deal.  As much as executives would like to remove the human element from their teams, coaches embrace it.

Coaching is all about squeezing production out of players, while the GM aggregates what he believes is the most talented group he can find.  When both do their jobs well, the result can be a championship.

During the joint media appearance last week at the Colts Complex, both Grigson and Pagano extolled the virtue of suppressing ego and focusing all energy on what is “good for the ‘Shoe'”.  While they sang from the same hymnal, it was clear neither relished the moments spent together in front of the media.  Both looked like they would rather have been at the dentist.

Well, what appears to be good for the ‘Shoe’ is Pagano being head coach of the Colts.  While there are occasional lapses in game strategy, players seem to go hard for Pagano and respond well to his leadership.

If reports of Pagano’s doom are accurate, this will an example of men doing what is best for themselves – for their comfort – rather than what’s best for the team.

Maybe the Bulls got it right by replacing Thibs with Fred Holberg, just as it appears the Golden State Warriors made the right call by punting Mark Jackson in favor of Steve Kerr, but maybe the Bulls won because of Thibs rather than in spite of him.

Whatever the Colts do, this will plot the course for the franchise for a generation.  Discharging an effective leader in favor of what might be believed to be an elite one is a 50/50 proposition at best.

Prudence would dictate Grigson and Pagano find a way to get along, appreciate one another’s talents, and move forward doing whatever is necessary for the ‘Shoe’ to succeed.

That’s what adults do – suppress selfish comforts in favor of behavior that leads to success.  How can Pagano and Grigson ask players to embrace physical pain when they themselves are unwilling to welcome a little emotional upheaval?

Every season Andrew Luck is under center for the Colts that does not end in a Super Bowl is wasted, and what are the odds Luck’s career will end as the next great quarterback is available for the Colts to select at the top of the draft – again.  It can’t happen three times in a row, can it?

Grigson and Pagano need to bury the hatchet right now – this very minute – or the future of a team that has been one of the NFL’s best since 2001 (minus the aberration of 2011) is in very real danger.