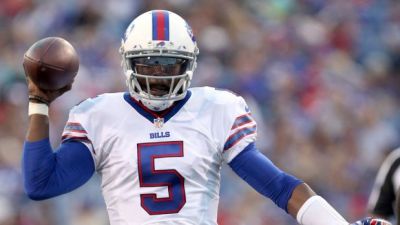 Tyron Taylor looked very good against the Colts yesterday, but that’s what happens for Colts opponents in openers.

During the Ryan Grigson/Chuck Pagano era, including yesterday’s loss in Buffalo, the Indianapolis Colts have gone 2-5 during the first two weeks of the season.

The good news is that after those first two weeks, the Colts are 31-10, have made the playoffs all three seasons and advance a step further every season.

More good news – the New England Patriots lost their opener last season by 13 on the road to an AFC East opponent.  They went on to win the Super Bowl.

Moral of the story is not to sweat what happened yesterday, which was an embarrassment for a team with designs on earning a spot in Houston for Super Bowl L.

It would have been nice to see Andre Johnson play like a hall of famer, Darius Butler stick somebody, and a measure of discipline that might have prevented the three turnovers and five penalties that doomed their effort.

Losing to a team like the reasonably good Bills isn’t the end of the world, but other than Henry Anderson playing like a first rounder than a third rounder, there wasn’t a hell of a lot to point to that would motivate optimism.

The Colts are going to be okay, but that might be the problem – they are okay.  How can a team with one elite player in the prime of his career on its roster be anything but okay?

That’s what happens when first round draft picks are wasted over several years.  Running back Trent Richardson (acquired in exchange for the 2014 first rounder), 2013 first rounder – outside linebacker Bjoern Werner is still on the roster trying to make plays on special teams, and #29 overall pick this year – receiver Phillip Dorsett’s biggest contribution yesterday was to the Bills when he fumbled away a punt.

it’s still way too early to judge Dorsett, but I’ll take Griff Whalen fair catches over a fumble all day.

Watching this game – and re-watching for the especially masochistic – was not a rewarding experience for Colts fans, but as we have learned over the years, early season failure doesn’t portend a lost season.

Take a deep breath, relax, look forward to next Monday night when the Colts will try to reverse the misery they have authored through their first two weeks of the season since 2009 – the last time the Colts started 2-0.  You remember the 2009 season, don’t you?  The Colts started the season with 14 straight wins before making the logical but cowardly decision to tank the last two to prepare for the postseason.

The only opener the Colts have won since 2009 came against the woeful Oakland Raiders in 2013, so yesterday’s loss and the sour taste in the Colts mouths are just par for the course for Colts fans.

There is good news – week one is over.  That’s the primary positive.  The offensive line was okay.  Henry Anderson with four tackles for loss (the Colts team leader for TFL during the entire 2014season was Werner with seven) looked like former Chicago Bear Dan Hampton.  There was no commitment to run, which I like.  When your best player is the quarterback, put the offense in his hands.  And the New York Jets beat the Browns 31-10.  What are the odds the Jets play two consecutive solid games?

Colts fans are going to be hysterical this week, but should know better after watching opening day malaise for five of the last six years.

Relax, every NFL regular season is a book with 16 chapters.  Every team since the 1972 Miami Dolphins has had at least one regrettable chapter.  The Colts like to get their’s out of the way early.

2 thoughts on “Relax, it’s a long season! The Indianapolis Colts losing openers is par for the course”