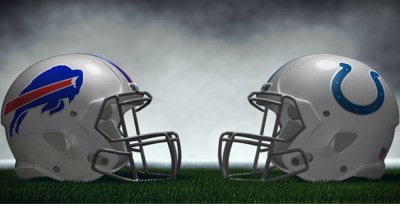 Indianapolis Colts coach Chuck Pagano sure does like to lavish praise upon opponents.

It doesn’t do a coach any good to underestimate competition, but the way Pagano has been effusive in describing the thoroughly mediocre Buffalo Bills has been a great source of entertainment during his media availabilities all week.

The respect Pagano shows seems genuine.  He’s not greening us like Lou Holtz always did as the coach at Notre Dame with craziness like, “The University of Notre Dame might not be good enough to beat Navy this Saturday.  They are just that good.”

Pagano’s awe for his opponent comes from the heart, not a sense of the absurd.  That doesn’t make it any more accurate than Holtz’s flowery assessments.

Listening to Pagano, you would think that Tyrod Taylor has the arm of John Elway, the grit of Brett Favre, and the wheels of Michael Vick.  Sorry, Sunday’s game will be Taylor’s first start, and the bust in Canton has yet to be cast.

The Bills defense is a legitimately disruptive group, but the 1985 Chicago Bears, they are not.  The unit’s best player, the recently well paid in the extreme Marcel Dareus, is suspended for the opener and won’t play, and rookie cornerback Ronald Darby is going to be paired with a series of Colts receivers who have been salivating at that prospect since the schedule was released.

Can the Bills get to the quarterback?  This group has posted 57 and 54 sacks during each of the past two seasons, and with Rex Ryan as their new coach, the dogs will be unleashed on Andrew Luck with extreme relish.  So, you bet they can, and will.

The Bills haven’t posted double-digit wins since the turn of the millennium, and with a starting quarterback who is 19-35 for 199 yards, no touchdowns, and two picks for his entire career, the Colts have a serious upper hand in the most important matchup – quarterback.

The Colts have plenty of question marks, and the deeper you dig without having seen much real action through the preseason, the tougher this game seems, but by keeping the analysis simple, the result is clear.

I know, you’re pacing the living room already, “Oh my God, the Colts offensive line has never played together, and what do we know about Jack Mewhort at right tackle?  If the Bills find a way to isolate tight end Charles Clay on aging linebacker D’Qwell Jackson, they will pick apart the defense all afternoon.  On the plays where 32 year-old running back Frank Gore rests, a rookie is going to have to diagnose complex schemes from the clever and aggressive mind of Ryan.  It’s going to be a bloodbath!”

Stop being a hysteric.  Despite the Colts starting a different set of offensive linemen damn near every week, they managed to win four out of five games played last season against top 10 defenses.  The one loss, against the Denver Broncos in week one, was avenged in the divisional round of the playoffs.

Those games were won with an offensive line in flux, a fat running back who was allergic to holes, a starting wide receiver whose skills degraded from hall of fame to ordinary before our very sad eyes, and a suspended then injured defensive game wrecker gone for the season.

During the offseason, the Colts added Frank Gore and Andre Johnson to replace the fat and old guys, and welcome back Robert Mathis.

The Bills have a top ten defense, and hopefully you are now aware that it will be exploited more often than it will cause mayhem-generated turnovers.  This is what the Colts do – combat aggression with calm and reasoned execution and extreme athleticism.

The Colts defense is young but potentially better too, and it will baffle Taylor much more often than the Bills will torment Luck.

It’s not going to be simple, and it might be be pretty, but if the Indianapolis Colts are truly a team with valid Super Bowl dreams, they will find a way to beat a team who boasted Doug Flutie as its starting quarterback and Hall of Famer Bruce Smith as its sack master when it last played in the postseason (in 1999).

The line is Colts -2.5, and I take it.  The over/under is 45.  You’re on your own there.  The weather looks good, but without seeing these offenses intact in a single regular season game, I have no confidence that my gut pick of under is likely to cash.