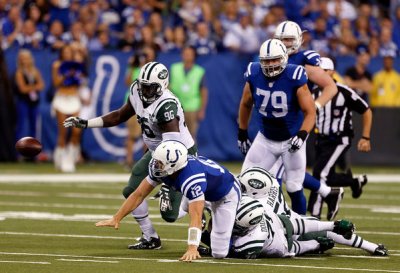 Yikes! Andrew Luck and the Colts seem to be regressing.

This was an impossible to watch from start to finish mess.

The Indianapolis Colts losing to the New York Jets 20-7 last night in front of a national audience turned back the clock to 1993 – the last time the Colts were shutout at home, and the last time they were quite this inept offensively.

If this was one of the ubiquitous good, bad, and ugly recaps of the game, the good would include an incredible interception by safety Mike Adams, and Frank Gore running well when he wasn’t fumbling at the goal line.  The bad would defer to the ugly, and the ugly would fill the pages needed to print a James Michener novel.

Nothing going well against a team that appeared to be ripe for thrashing on a night when the Colts were at their post-2011 worst has landed the Colts in a precarious 0-2 position.  And coach Chuck Pagano appears to be headed for a Jim Mora-esque demise.

It’s September 21st, for God’s sake.  The Colts were 0-2 last year, finished 11-5 for the third straight year, and made it to the AFC Championship before being mercilessly throttled by the cheating bastards of Boston.

There is all kinds of time left to right this ship, but the question is whether this is a ship that will respond to efforts to correct the many flaws obnoxiously apparent to anyone with a TV tuned to ESPN last night.

Andrew Luck looks lost in the face of pressure, and the rest of the offense – minus the occasional bursts from Frank Gore – appears listless.  The blitzes pour through indifferent and/or inept protection.  Three interceptions and a fumble from Luck seemed out of character for a guy correctly anointed as the next great quarterback.

Chuck Pagano appeared to be right at the razor’s edge of ill-temper during his postgame press conference.  There’s no question he’s feeling the pressure, and his desire to share the obvious similarities to last season’s lackluster start belied a prayer the outcome might be similar, “We were right here last year. Same exact deal. Go on the road and get beat, come home on Monday night and get beat, 0-2, got things figured out then we ripped off five straight. So our full intention is to go back to work and do the same damn thing.”

But this feels different – really different.  There isn’t a panic, but a sense exists that the tools necessary to replicate last year’s turnaround simply doesn’t exist.  That’s not to say it somehow can’t happen, but to expect it seems wildly optimistic.

Expectations can be a team’s worst enemy, and the claptrap about multiple Super Bowls from this particular group of Colts appears Powerball player-esque optimistic.

The Colts say all the right things during their postgame media opportunities – this is a process and reviewing the film will be the next part of a system that will cause better play next week, and all that stuff – but the truth lies on the field seven floors below me on the field where tonight’s debacle was played.

This team is not ready right now to compete at a playoff caliber.  It would be easy to go entirely doom and gloom, and maybe that’s the smart play.  Missing on two straight first rounders, signing free agents who are past their prime, and a front office squabble that threatens to tear this team apart from within might be too much to overcome.

Maybe it’s the Cubs fan in me, but until the Colts are eliminated, I’m choosing to view this group through 2013/2014 goggles.  They might continue to falter and limp and gasp and stumble, but if the past truly is prologue, the Colts are going to find a way through this morass of error-fueled failure to find mediocrity and then achieve a measure of success.

The next three games are winnable even for a team playing like tonight’s version of the Colts.  The Tennessee Titans, Jacksonville Jaguars, and Houston Texans are among the worst teams in the NFL and should provide the Colts with three chances to get untracked.

Then, the Patriots come calling.  Measuring sticks in the NFL can be cruel, and October 18th is the date of that most meaningful exam.  That gives the Colts 27 days to cram.

Nowhere to go but up.