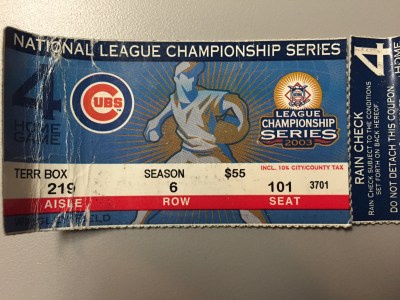 I carry this ticket stub from Game 7 of the 2003 NLCS with me as a reminder that hope is for children. And yet, tonight, here we go again.

Baseball fans backing the 29 teams that do not call Wrigley Field home loathe hearing about the 106-year championship drought, the unique level of suffering it causes, and the many ways Cubs fans are different from them.

I was accosted by an Expos fan at Indiana University in 1984 while wearing a Cubs shirt, “Go ahead and name five players from the ’69 Cubs!” the guy yelled.  He was upset that during that magical autumn the Cubs bandwagon was filled beyond capacity with frontrunners new to Cubs fandom.

All fans have different experiences.  Do Colts and Pacers fans love their favorite teams less than Cubs fans love the Cubs?  Of course not, but the generational distress passed from father to son on the north side of Chicago is quite unique.

The Cubs have gone to the World Series seven times since they last raised a championship banner – the last time in 1945.  Since then, they have qualified for the postseason six times without advancing to the World Series.  That’s 13 trips to the postseason when the Cubs have lost their final game – obliterating the hope that comes a little harder to muster with every heartbreak.

And those moments of distress don’t count the slow deaths experienced during regular seasons like 1969 and 1977 when the Cubs started strong but faded horribly down the stretch.

Outrageous bad luck and perceived jinxes have convinced fans that it might just b their destiny to never see the Cubs triumph.  Not only is there not a single living Cubs fan who has witnessed a championship, but virtually none of our fathers have either.  My Dad was born 21 years after the Cubs last title – he died in 2002 and would be 86 if he was alive today.

As the Cubs embark on yet another postseason, fans are indulging in the hope that destiny will finally shine on the last ballpark to erect lights to accommodate night baseball.  In the deep dark recesses of our minds, we remember Bartman, Leon Durham, the Black Cat at Shea Stadium, and have heard all about Billy Sianis levying a curse upon the Cubs after his goat was denied a seat for the 1945 World Series.

We remember the Cubs have lost nine straight postseason games, and that every time we have released our doubts about the Cubs, something incredible has brought us to our knees.

Listening to Eddie Vedder’s “All the Way” with tears running down our cheeks, we think of Ernie Banks smiling through the tears brought by endless disappointment.  We shriek along with Steve Goodman’s “Go Cubs Go” as the W flag is raised after each win, believing there might just be an October when we sing it last and loudest.  We can still hear the echoes of Jack Brickhouse and Harry Caray saying next yext will be different.

We tell ourselves and anyone who will listen that these Cubs are different – that Jake Arrieta is not a redux of Rick Sutcliffe in 1984, that Joe Maddon is different from Leo Durocher, and that Anthony Rizzo has nothing other than left-handed power in common with Durham.

There is hope that all fans who will be seated in the front row at Wrigley Field will remember the lesson of Steve Bartman – that interfering with a ball likely to be caught by a Cub carries a serious cost.

The current crop of young Cubs – Kris Bryant, Addison Russell, Javy Baez, Kyle Schwarber, and Jorge Soler – were in grammar school when the Cubs blew a 3-1 NLCS lead against the Florida Marlins.  They have no recollection of Cubs postseason unpleasantness other than the overmatched 2007 and 2008 teams that were swept into irrelevance by the Arizona Diamondbacks and Los Angeles Dodgers.

Tonight, another trip to the Last Chance Saloon awaits Cubs fans who have been so memorably disappointed since a time when Civil War veterans proudly marched by the hundreds in Independence Day parades.

Many of our grandfathers, dads, friends, favorite Cubs broadcasters with whom we have shared this love and unfulfilled hopes are gone, but the illogical torment of unrequited love for a doomed team remains.

One thought on “Cubs fans hopes reignited, but not without an emotional fight”