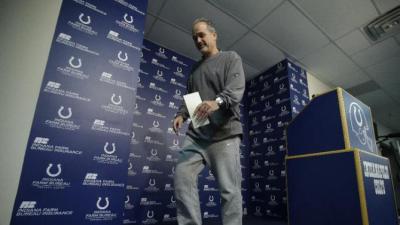 Chuck Pagano can be a charming guy, but his recent behavior toward the media has been anything but.

It’s usually understandable when people treat the media with indifference.  We can be a pain in the ass – all those questions when coaches and players want to prepare for an upcoming game or relax.

But the media are mostly easily satisfied folks paid to inform fans about their favorite – a marketing arm for a franchise and individual brands that drive wealth for the very people who hold them in such low regard.

A reasonable answer will pass muster with the media, and no one expects a coach like Chuck Pagano to predict the future.  When Pagano is asked whether quarterback Andrew Luck is going to play Thursday night, no one expects an absolute response if the necessary data has not been (or can’t be) compiled.

Here is a transcript of the portion of yesterday’s Pagano press conference that deals with Luck’s health:

Were you able to tell anything from what Andrew Luck did today? Did he work out separately?

Did he throw much today?

Is that a yes or no though?

“He had a good day today.

Is the goal seeing in the next couple days him possibly playing on Thursday?

“No different than it was. The goal was to try and see if he would be available for yesterday’s ballgame and it just didn’t work out that way. So still a goal to try to get him ready to go for this game.

Are you pretty confident that he made some progress and strides from where he was on Saturday morning?

Do we read anything into the release of Josh Johnson leaving just two quarterbacks on the active roster?

Was that decision related to Andrew’s health?

“Again, that’s up to you guys to figure that one out. You guys are a lot smarter than I am.”

Media is Indianapolis are reasonable compared to most cities.  No one tries to paint Pagano, Frank Vogel, Larry Bird, Tom Crean, or Chris Holtmann into a corner and make them appear stupid.  This group of media is worthy of respect and deserve reasonable answers to good questions.

Last week, Indianapolis Star columnist Gregg Doyel asked Pagano whether Luck was in the state of Indiana, Pagano dismissed it as “the craziest question” he’s ever been asked in his football career.

When Fox 59’s Chris Hagan reported that Luck had been examined by out of state physicians, Doyel’s question stopped being crazy.  Hagan is from Alabama, preeminent shoulder doc James Andrews is from Alabama, and Luck has a dinged shoulder – draw your own conclusions.

The best kind of respect is mutual, and unless Pagano decides very soon that sharing pertinent facts is not going to corrupt the Colts ability to succeed on the field he stands to lose a very important asset as he fights for his job during a season that could break in any number of directions.

Like our parents always tell us, “when in doubt, tell the truth.”  Or at least something that sounds like the truth.

Coaches owe the media nothing, but talking to them like children gets the attention of the media and can turn them surly, and that’s one thing Pagano does not need.