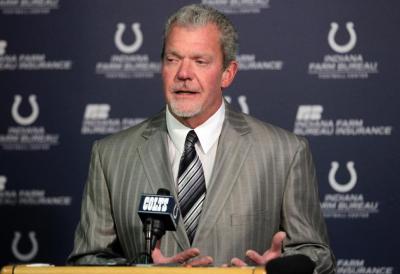 Jim Irsay is as frustrated as the players and coaches, and when Irsay gets frustrated, changes are pondered.

It’s hard to win a game in the NFL.  That’s a fact.  After making 11-5 regular seasons look easy, the Colts have had an unusual amount of difficulty in getting that done this season.

After a 27-21 loss to the 3-4 New Orleans Saints, the Colts expressed frustration in their own inability to play 60 minutes of aggressive and tactically sound football.  Rightly so.

Statistically, the Colts are fortunate to be 3-4 and still leading the AFC South, which they could win by going 6-10.  How odd would it be for the winner of a division to have only beaten the other members of its division?  It’s never happened in the history of the NFL, but the Colts are a Monday Night Football loss to the Carolina Panthers from being halfway to that ignominious achievement.

An NFL regular season is 17 weeks long with 16 unique events for each team by which they judge themselves and are judged.  Through seven chapters, the Colts have been seriously flawed, but with nine games remaining, opportunities for redemption are ahead.

That is where hope exists for players, coaches, fans, and owner Jim Irsay.  Colts outside linebacker Robert Mathis summed up the Colts state of affairs through seven games very nicely, “Our biggest problem is identifying what the problem is.”

How the Colts got here statistically is too depressing to regurgitate, but should they be unable to figure out what the cause of their new found mediocrity is, the possible outcomes are intriguing and the sidebars endless.

We have heard Chuck Pagano extoll the virtues of the U many times, and with Al Golden being fired as the head coach of the Miami Hurricanes, that gig might make Pagano pine for South Beach, and why not?  Here’s a coach that authored three straight 11-5 seasons and took the Colts a step farther in the playoffs each season, but was offered only a one-year extension.

That leaves Pagano dangling in the wind after this season, almost a certain goner if the Colts can’t rebound to win in bulk during the second half of the season and make a substantial playoff run.

Pagano took the puny extension offer as an insult, and may choose to leave even if he isn’t fired.

Another sidebar to this Colts decline was voiced this morning by ESPN analyst Tim Hasselbeck (brother of Colts backup Matt Hasselbeck), “You’re (Luck is) starting to trend closer to Jay Cutler and Matthew Stafford than trending toward Aaron Rodgers.”

That is not what Luck wants to hear as he heads toward negotiations for his huge extension.  Regardless of whether he projects as Stafford or Rodgers (he is not, nor never will be similar to Cutler), he’s never going to want for cash, but his physical and psychological makeup appears to portend greatness.  Anything short of multiple Super Bowl wins would be disappointing.

Mathis’ quest to identify the problem extends to the highest reaches of the front office as Irsay continues to ask why the Colts are struggling.  Is it the roster GM Ryan Grigson cobbled together out of the rubble of the 2011 meltdown?  Is it Pagano’s leadership?  Is it the game plans of defensive coordinator Greg Manusky and offensive coordinator Pep Hamilton?  Maybe it’s all of the above, or maybe the Colts pull out of this nose dive to show the question is moot.

Unlike the tens of thousands of fans who bolted from Lucas Oil Stadium yesterday despite the chance the Colts would find a way to pull out the improbable comeback win, fans will want to stick around for the second half of the season and immediate aftermath as drama is certain.

The Colts have been mostly commotion-free since the 2001 and 2011 firings that followed disappointing seasons, but a step back is likely to be met by some fury from Irsay, and that fury will have a wake.