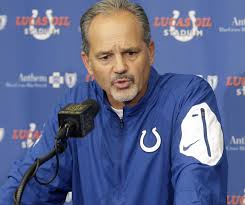 The strain of his likely demise is wearing on Chuck Pagano, but it shouldn’t.

No one wants to get fired.  There is an unpleasant stigma to getting the ax, and the phone calls to share the news with family are humbling, unpleasant, and easily the worst part.

Getting fired happens to coaches.  It happens all the time, and to almost every coach who aspires to lead young men and women to victory and enlightenment.

It’s about to happen to one or more coaches in Indiana, and they will learn what everyone who has been fired learns – that life goes on, and those lessons imparted over a career of teaching athletes how to handle adversity will come in very handy.

The toughest part of being kicked to the curb for coaches who measure themselves by the good they do for others will be the feeling that players and staff left behind will not be in a position to succeed in the same way by the new boss.  If the replacement is a bonehead, their careers might end too.

Indianapolis Colts coach Chuck Pagano appears to be a coach committed to helping his players succeed, and when he is finally and humanely dispatched, that will be the most unpleasant aspect of getting bounced – after the initial jolt of the message settles.

Feeling sorry for Pagano appears silly as he has made enough cash (roughly $18 before taxes) as the Colts coach to cushion the blow very nicely, but jobs aren’t about money at that level.  Coaches like Pagano don’t show up for work like a cashier at Kroger’s.  The job itself is the reward.

Knowing he helped kids become young men, succeed as players and businessmen, and forged bonds that can never be broken will be his legacy.  The losses will always hurt like they happened yesterday.  The wins will also linger, but the joy associated with them will always be dwarfed by the pain of the losses.

Indiana football coach Kevin Wilson is also being closely evaluated after two collapses against Big Ten opponents.  This is year five of a seven-year deal for the former Oklahoma offensive coordinator, and that means he will either earn an extension after this season or be sent away.

If the decision is made to engage someone else to continue Kevin’s work, he will be a highly sought after offensive coordinator and his career will continue.

What both Pagano and Wilson will have to occupy their hearts and minds as their careers wind down is the knowledge that they provided those in their charge with unfettered access to their well spring of wisdom, and that everything in their power was done to help players and assistants access their absolute best.

GMs, owners, and ADs can strip a title, but not the impact former coaches have had on the lives of those they led.  That’s the report card that matters – not the rings, trophies, and banners, although those are nice too.

Life is measured by how many we touch and how profoundly our lives are intertwined to improve our ability to appreciate the multitude of moments we share.  Coaches who do that at a high level crave the opportunity to continue.  Those who suck at it miss the paycheck.

Pagano and Wilson might lose their jobs over the next month or two because the reality of the gig is that bosses get antsy for the kind of immediate gratification (and cash flow) that only winning can provide.  They will pack boxes, sell homes, relocate to the next opportunity, and recall fondly the people they impacted as well as those who impacted them.

That’s life, and that’s what they – along with every other coach – signed up for.  Where getting fired is concerned for coaches, it’s like William Munny (Clint Eastwood’s character in Unforgiven) says about people being killed, “Deserve’s got nothing to do with it.”

Pagano and Wilson will be fine, whatever their fate because their players are better for having them in their lives.

One thought on “Chuck Pagano and Kevin Wilson may be fired, but their legacy will be strong”