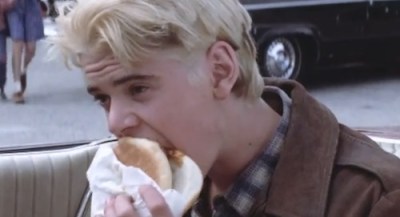 Imagine this BBQ wolfing moron plus 35 years. That’s what I’m looking forward to in two hours.

When a talk radio host where I worked made some inane and ill-conceived on-air bet, I always forced them to follow thru.

It wasn’t fair to tease listeners and not pay off, so whatever the harebrained threat was, it was done.

If I refuse to pay a similar bet now that I’m a host, that would make me a hypocrite.

Hence, I will walk into Studio 2000 this morning at 10 a.m. and the stylist will bleach my hair white.  Better to look like an idiot for a few weeks than be a liar for a second, I guess.

The bet was that the Colts would finish the 2015 regular season 13-3.  I’m usually quite prescient in predicting records, and I was oh so confident about this one.

How could the Colts not improve over the 11-5 records they have sported over the past three seasons?  Andrew Luck was a maturing superstar in the making, free agents were acquired to bolster damn near every area, and owner Jim Irsay laid down the gauntlet as he introduced first round draft pick Phillip Dorsett to the media, “In the Andrew Luck era, we would like to win at least two world championships.”

So I told my producer prior to the season, “When the Colts lose their fourth game, I’ll have my hair bleached white!”  As it came out of my mouth, I smirked for how clever I was to threaten something so idiotic but visual for a bet I would never have to pay.

The Colts are in the woeful AFC South – a division so putrid the Colts haven’t lost to one of their rivals since 2012.  Plus, its the AFC Souths turn to play against each of the four NFC South teams once each.  The Carolina Panthers pulled the rare trick of winning that division last season with a losing record.  How hard could it be to sweep those patsies?

That’s 10-0 before the Colts play the rest of their schedule – @Buffalo, vs. Jets, vs. New England, vs. Denver, @ Pittsburgh, and @Miami.  How could the Colts not at worst split those six games?

Ah, the best laid plans of mice and men…  The Colts have not only looked mostly putrid in their losses, they haven’t been world beaters during the wins.  If Jacksonville had converted one of three missed field goals, I would have had been forced into being an Edgar Winter wannabe a week ago and the Colts would be 2-5.

For the first time in many years, my prognostication for the Colts record has deviated wildly from reality, and the fourth loss of the season came this past Sunday as the Colts sleepwalked through a miserable first half at home against the lowly New Orleans Saints.  An improbable rally that would have forestalled my penance fell short, and so this morning I will sit in a chair for however long it takes for me to be transformed into a middle aged version of Pony Boy from “The Outsiders”.

Is that justice?  Nope, It’s radio.

That’s the life of a sportstalk host who can’t keep his mouth shut (which would be a nutty skill for a radio host to embrace), the convenient skill to forget what he might have said during a moment of hubristic waxing, and lack of a producer who lets what I say flow unheard into one ear and out the other.

White-washed hair grows out, but the problems caused by the Colts swinging and missing with at least two straight first round picks and significant lapses in free agent assessment will persist and chart the course of the franchise for years to come.