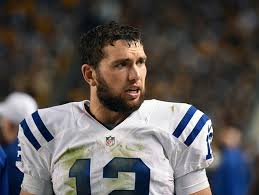 There are a lot of questions swirling around the Colts right now, and most revolve around the erratic play of Andrew Luck.

Questions – so many questions.  A few answers too.  Through seven games, including last night’s thrilling overtime loss in Charlotte, what do we know, what might we guess, and how must the Colts respond?

How can the same Colts offense produce three-plus quarters of historic offensive ineptitude, and then become explosive and productive in the fourth?

If Andrew Luck’s awful performance through three quarters last night (40 yards passing) can be explained by a physical injury, what explains his excellence in the fourth quarter (185 yards passing)?

If the Colts weren’t prepared for the first three quarters, why did they appear to be up to the challenge of the fourth?

Betting the under might be smart, but is it worth the anguish of a game like last night?  The over/under for the Colts vs. Panthers was 46.  That looked like a lock after the Panthers scored early in the fourth quarter to make the score 23-6.  The Colts were impotent and the Panthers would likely run clock.  Then the Colts awakened and smart guy gamblers wept.

How can the Colts be 3-5, and still lead the AFC South?  That’s actually a question with a simple answer – the other three teams are horrendous.  It would not be a surprise to see the Colts win the South with a 6-10 record – posting wins only against their division rivals.  Obviously, it would be the first time that has ever happened, and likely the motivation for the NFL to change the rules for playoff seeding.  A 6-10 team should not host a playoff game.

Good news among the rubble of the heartbreaking loss is that Robert Mathis posted two sacks.  Mathis’ ability to get to the quarterback is a necessary ingredient for the Colts success, and his progress toward full health may be the piece of the puzzle that allows the Colts to overcome offensive wobbles (to be kind) to win the AFC South and earn whatever progress in the playoffs of which they might be capable.

Can Luck figure out these fourth season setback?  Luck is a really smart guy.  He plays trivia Monday nights in a downtown bar, and he is good at it.  He enjoys puzzles, and like all puzzle/trivia guys, the more difficult the puzzle, the greater sense of accomplishment when it’s finally solved.  Sometimes watching Luck play, it seems he enjoys the process of decoding the most difficult puzzle possible, and that puts the Colts in the position they were in with a 23-6 deficit.  At that point, the puzzle becomes winning, and Luck thrives.

That’s dime store psychology, but at this point we have no alternative than to cobble together a few facts and guessing at the rest – kind of similar to the way Luck currently reads defenses.

A question the Colts will soon answer in the affirmative is whether Luck’s fourth quarter heroics are worth the erratic play he exhibits at other times and the downright awful version of himself they tried to survive through the first three quarters last night.  The Colts will sign Luck to a huge extension that will likely make him the highest paid player in NFL history because the alternative is saying goodbye to a franchise QB..

Can the Colts bounce back quickly enough to compete well against the Broncos?  The Denver Broncos boast the top passing defense in the NFL, the third best run defense, lead the NFL in sacks with 29, have allowed the fewest yards from scrimmage, are second in passer rating allowed, and stand tied for second in takeaways.  They are the Carolina Panthers defense’s grown-up, badass brother.

What does all this mean for Chuck Pagano – the lame duck coach who rejected a one-year extension to bet on his ability to succeed for a fourth straight season and earn a bonanza – either from the Colts or some other time in need of a players coach?  The frustration level is rising by the week, and if the Colts can’t manage a win this Sunday, a 3-6 record will be a huge disappointment.  Still, I can’t see owner Jim Irsay deciding to fire Pagano midseason.  The results are rarely positive in the short term, and even if they are, an interim coach might be tough to replace if the Colts are successful.

So what will happen/should happen?  You ride this out.  Wait until all the evidence is in – the entire schedule is played – and then make the significant decisions that will chart the future of this franchise.  Emotions are for children and have no place in the room where the leaders of a business are selected and courses charted.  Take a series of deep breaths, understand the ramifications of rash calls, and try to enjoy this roller coaster ride of a season, which is a little reminiscent of the 2001 season that brought Tony Dungy to Indy.