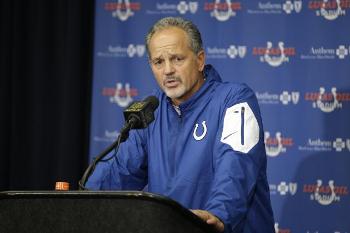 Chuck Pagano’s talks with the media have become strained and strange, and yesterday was among the strangest.

Chuck Pagano is a good football coach whose battle against leukemia inspired millions.  His leadership was part of the equation that led the Indianapolis Colts to three straight 11-5 records and three playoff wins.  But he is quickly unraveling because of the pressure of being a lame duck (in the final year of his contract) coach for an underachieving team.

Yesterday, he spoke to the media to explain the firing of his offensive coordinator, and the words the emerged from his mouth were sort of confused, odd, and reflective of the difficult times for the team he leads.

1 – “At the end of the day as the head football coach it’s my responsibility to make these calls and mine alone. Mr. Irsay and Ryan Grigson and myself, we’re all on the same page, so when I say alone, I’m talking the organization, myself.”  It’s his responsibility and his alone, but it’s a responsibility shared with Grigson and Irsay?  Wincing is the proper response to this meandering and ultimately meaningless and confused response.

2 – “I think we saw on Monday Night Football a football team because of its grit, its perseverance and its character down 17 points with less than a quarter to play against a football team on the road, undefeated, playing as good as anybody in the National Football League comeback, force overtime and take the lead in overtime. That just doesn’t happen unless you have the right people. We’ve got the talent. We’ve got the grit. We’ve got the character.”  Okay, so the Colts had the talent, grit, and character to comeback from a deficit too large to completely overcome.  What was with the guys who stumbled into that 17-point hole?  Those were Colts too.  I get the need to try to put lipstick on that pig of a loss, but insulting fans with this absurd depiction of his team is unnecessary.

3 – “I’m very grateful that Chud would take over and do this. I don’t think, not everybody would accept the responsibility and do that considering the timing.”  Grateful?  Is being the OC for the Colts not a great (or even good) gig.  Working with Andrew Luck, Frank Gore, TY Hilton, Donte Moncrief, and Coby Fleener is an invitation to misery?  What the hell would it say for the Colts if “Chud” refused this promotion?  If this was worthy of Pagano’s thanks, would Chud saying no be very understandable?  Is being the Colts OC like being George McGovern’s running mate in the 1972 presidential election?

5 – “Next to the ’85 Bears and the 2000 Ravens I don’t know if I’ve seen a defense quite like this.”  This quote shows some clarity despite the lunacy it represents.  Setting expectations for the Broncos defense to historic levels might buy Pagano a couple of weeks of grace if the offense craps the bed Sunday, but the Broncos have a long way to go to actually earn that comparison – one worthy of the rabidly hyperbolic Lou Holtz.

The Colts are in the midst of a tough time of their own making, and Pagano’s increasing confusion is a symptom of the chaos.  Bad drafts, bad free agent signings, a historically terrible trade, a refusal to extend Pagano’s contract or allow him to choose his own offensive coordinator until two days ago.  All have conspired to bring the franchise to this odd time not representative of the era of consistent high performance all but two seasons since 1999.

These are interesting times on West 56th Street, and they are taking their toll on a good man and coach.