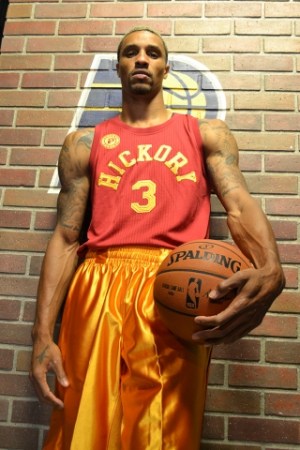 George Hill and the Pacers will rock the Hickory uniforms tonight against the Miami Heat.

Like many sports weekends in central Indiana, there is plenty to keep you occupied, and if you don’t have tickets or the cash to buy them, that shouldn’t keep you on your couch.

Time to get out and do something – anything to enjoy life among your friends, family, and strangers who may become friends.

Here are the top seven things you can do this weekend instead of sitting around awaiting death.

Pacers rock Hickory unis vs. Heat – tonight 8:10p – We love “Hoosiers” in Indiana.  In fact, everyone loves “Hoosiers”.  It’s the go-to pick for best sports movie of all-time, and tonight the Indiana Pacers will wear Hickory jerseys to celebrate the basketball heritage of the Hoosier state.  The Pacers will use these events to celebrate the people who have made basketball and Indiana synonymous.

Colts vs. Broncos – Sunday, 4:25p – Peyton Manning’s final game at the stadium he built will come this Sunday when the undefeated Broncos visit Lucas Oil Stadium.  Without the extended run of excellence that coincided with Manning’s era in Indianapolis, it’s damn likely the Colts would have moved to Los Angeles 15 years ago.  Indiana high school football coaches cite Manning as the motivation for a generation of kids to play and excel at football.  The legacy of Manning as a player in Indianapolis will end this weekend, but the after shocks will be felt for generations.

IU vs. Iowa – Saturday, 3:30p – Indiana hosts the undefeated Iowa Hawkeyes, and while it would seem a longshot to hope that Indiana can compete successfully with a national championship contender, the Hoosiers have been close to getting over the hump against both Ohio State and Michigan State this season.  Regardless of the results, a visit to Bloomington is all kinds of fun.  Really, graduates returning to Bloomington have learned to enjoy an autumn day (and night) without investing in the result of the game.  If Indiana wins, great.  If they lose, great.  The result is the same – let’s go to Nick’s!

High School Football – tonight 7:00p – As we enter the third weekend of the tournament, 75% of the teams that hoped to reach Lucas Oil Stadium are at home, and after tonight’s games 50% will have played their last game this season.  That means players and coaches will be emotionally invested, and the games will be dramatic.  Many sports fans grouse about the indifference with which some professionals compete.  Head to a high school football game tonight, and you will see a decided lack of indifference.

Butler vs. St. Joe’s – Saturday, 8:00p – Any trip to Hinkle Fieldhouse is well worth the effort and expense.  It’s a beautiful place, and the Bulldogs have a chance to be very good this season.  Kellen Dunham is a potential All-American, and the team first basketball played relentlessly at Butler is a welcome change from the self-impressed me-first hooping done at other venues in Indiana.

Go play something yourself – The weather tomorrow (Saturday) is supposed to be sunny with a high of 57.  That’s warm enough for any outdoor stuff you might choose.  last weekend, a friend called and said, “We’re playing baseball in Zionsville, get out here!”  I got in the car.  A neighborhood game of baseball among friends might seem an odd choice for a bunch of 40-53 year olds, but why?  Is it fun?  Yes.  Do we still have enough athleticism in the tank to swing, throw, catch, and run from station to station?  Hell yeah!  So what’s keeping you from doing it.

Clear your schedule for a couple of hours next weekend to see Angelo Pizzo’s new film, “My All-American” which opens November 13th.  Angelo is the guy who wrote “Hoosiers” and “Rudy”, and this movie is similar in tone and theme, but equally satisfying.  Kids will love it, and if you are the coach of a youth football team, a field trip for the entire group is a must.  I saw a sneak preview last night, and it’s a very special film about love, dedication, and faith – all through the prism of football.