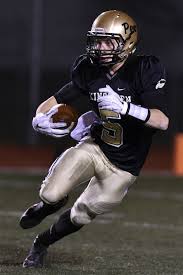 John Ohlson will try to bring home a state championship for the Penn Kingmen while playing with a heavy heart.

Thanksgiving is one of the great sports weekends on the calendar, and for people in Indiana it is filled with a multitude of events worthy of your time.

There is a time to sit on the couch and scream at the TV, but this weekend is not among them, unless you’re a Notre Dame fan as the Irish will be playing for their playoff lives tomorrow at Stanford.  This is a weekend filled with reasons to climb into the car and haul the family to one or more of the great sporting events being held in central Indiana.

1 – The Bucket Game – Neither Purdue nor Indiana is in the upper tier of the Big Ten, but for the first time in several years, a bowl bid is on the line for one of these perennial doormats in not exactly a rivalry game for the ages.  Either the Hoosiers or Boilermakers will walk out of Ross-Ade Stadium tomorrow with a second conference win, but if it happens to be the Hoosiers, they go bowling.  If the Hoosiers lose, a decision will need to be made about the future of the program.  This is year five of the seven-year contract Kevin Wilson signed to become Indiana’s coach, and the assumption is that either that contract will be extended after this season or he will be replaced.  Purdue’s Darrell Hazell has a buyout that would cost the university almost $7-million, which would be 700-million pennies.  Purdue president Mitch Daniels knows where every penny at Purdue is spent.  Translation – Hazell’s job is safe.

2 – High School football state championships – The 1A game is being played as I write, and the 3A and 5A games will follow today at Lucas Oil Stadium.  The 2A, 4A, and 6A games will be played tomorrow.  For many of the players and coaches, this will be the most memorable athletic event of their lives.  That alone is worth our attention, but two games have my intense interest.  The 5A game tonight will allow us a very good look at the most dynamic young football coach to come along in a long time.  Kyle Ralph leads New Palestine, and he has that program flat out rolling.  Ten years removed from playing collegiately at North Carolina, Ralph has lost one game in three seasons at New Pal.

2A – The other story is that of John Ohlson, and receiver for the Penn Kingsmen, who will play Center Grove in the 6A championship tomorrow night.  Ohlson’s dad Russ passed away earlier this year, and his grandmother passed this week.  He’s a tough kid with burst, think of a high school version of Wes Welker, who is dealing with a vat of adversity that is best taken in small portions.  John’s dad wasn’t just a good guy taken way too young, but a relentlessly present and positive figure in his son’s lives.  He was a coach and mentor for many athletes in St. Joe County, and you can bet that John’s heart will be full but heavy tomorrow.

3 – Pacers vs. Bulls, 8p tonight – The Pacers are riding a wave of unexpected excellence, having won nine of their last 11, while the Bulls are 9-4 on the young season.  Whether the Pacers are for real or simply benefitting from an excellent run by rejuvenated and healthy Paul George is what games like this will decide.  Few projected the Pacers to earn a playoff berth this season because of the departures of franchise stalwarts David West and Roy Hibbert, but not only have they played at a level worthy of a playoff berth, they appear to be a team that might be feared come April.

4 – Colts vs. Tampa Bay, 1p Sunday – Matt Hasselbeck is old enough to be Jameis Winston’s father, so this game Sunday will be a fascinating matchup of youthful physical superiority against weathered guile.  Both teams are 5-5, representing what many believed were the two worst divisions in the NFL when the season started.  The Colts need a win to remain atop the AFC South as the Houston Texans have kept pace, and the Bucs are in the middle of a very crowded wild card field in the NFL.  This looked like a laugher when the schedule was released, but not now.  This is the first of six 1p starts the Colts will play during the final seven weeks of the season, and you know how we love 1p starts.

5 & 5A – Butler and Purdue in non-conference laughers – Butler hosts SIU-Edwardsville while Purdue plays Patriot League member Lehigh.  While both should be relaxing romps for fans and scrimmages for players, remember what happened last night as Monmouth found a way to beat #17 Notre Dame, (who plays Iowa today at 7p).  Anything can happen in college hoops.  There are no bad college basketball games, only great games with lopsided results!

6 – Indiana Basketball is idle – This might be the best possible news for Hoosier fans.  Washing the taste of the vitriol that spewed from the mouths of Cream & Crimson clad hoops junkies will take time, and Monday’s game against Alcorn State should help.  The rest of the weekend can be devoted to calm hours with family and friends as the Hoosiers are idle.