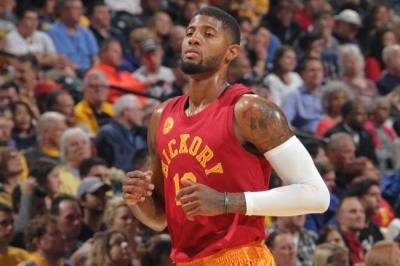 Paul George has been nearly unstoppable this season, and he’s one of the best stories in Indy.

What did I tell you about this weekend!  Plenty of good stories, as promised.  Wins by the Colts, Pacers, Indiana Football, a loss by Purdue (to Indiana for the third straight year), an offensive slugfest for the ages in the 5A state football championship, and a long overdue retirement announcement kept sports fans plenty busy in Indy this weekend.

1 – Kobe Bryant is done – and he’s been done for awhile.  That’s what age does to athletes.  It finishes them, all of them.  Maybe a straggler, an anomaly, can find a way to continue to compete and earn past his athletic prime, but most receive serious and concrete reminders of their frailty more and more often as they inch toward or just past 40.

Prior to last night’s game against the Indiana Pacers, Bryant announced this will be his final season, and that is the best news the Lakers have received in the three seasons of Bryant’s serious decline.

Since the beginning of the 2013-2014 season, the Lakers are 50-130.  Much of the responsibility for that on-court failure lies at the feet of Bryant, a $25-million per year injury-plagued albatross that has hung around the neck of the Lakers for far too long.

2 – Purdue fired three assistant coaches shortly after Saturday’s Bucket Game loss to Indiana.  Both coordinators are goners as it a defensive position coach.

Are those moves going to get the Boilermakers over the hump toward pivoting from the 6-30 record Darrell Hazell has posted in his three years at Purdue?  Almost certainly not, but the moves give fans a reason for hope as they mull a decision to continue to support a program that appears lost in the woods of nearby Camp Tecumseh.

It’s a cheaper move than to fire Hazell, whose buyout hovers at $6.7-million-ish.  The name of the game is hope, and canning the coordinators, who may or may not be responsible for any of the wreckage that Purdue’s once proud football program has become, was a chicken-poop move.

Remember Doug Mallory?  He was the sacrificial lamb as the fired defensive coordinator a couple of years ago for the Hoosiers when IU needed to give fans a reason to hope.  Brian Knorr replaced him, and what has happened to the defense?  In the just concluded 2015 regular season, Indiana ranked 123rd of 128 FBS programs in yards allowed, and dead last in passing yards allowed.  (There is a pace of play issue that leads Indiana to allow more yards than most, but that is no different from when Mallory ran the defense.)

Firing coordinators bought Purdue a little time, and saved them a lot of money.

3 – Matt Hasselbeck, 40, is 4-0 as a starter at quarterback for the Indianapolis Colts.  For the season, he’s completed 97-150 passes for 1,023 yards, seven TDs and two picks.  His passer rating is 94.4 ties him for 12th in the league, ahead of Ben Roethlisberger, Jay Cutler, Matthew Stafford, and Cam Newton.  Oh, and it puts him 18 spots ahead of the guy he backs up – Andrew Luck, who at some point soon will sign what may be the richest contract in NFL history.

4 – Paul George is tied for third in scoring (27.2 ppg) and 35th in rebounds (8.1) as the Pacers have started faster than anyone had a right to believe they might.  Through 16 games, the Pacers are second in the East and fourth in the NBA with an 11-5 record.

It’s fun to watch this selfless team move the ball quickly, push it up the floor, and still manage to defend well enough to win.

No doubt back to 100%, George is having his best season – a season where he is establishing himself as a first team All-NBA player.

Indiana has always been able to score the basketball under Crean, but have been conversely challenged in keeping the ball out of the opponent’s bucket.

Indiana might wind up with a respectable Big Ten record due to this being a down season in the conference, slow-in-coming improvement on the defensive end, and a little help from the scheduling gods who force IU to face Maryland, Michigan State, and Purdue (the three teams likely to be the best in the Big 10) only once.

Their record might be better year-to-year, but the quality of basketball won’t be unless the Hoosiers can learn how to defend a high screen.

6 – The mayhem of the 5A football state championship game played at Lucas Oil Stadium Friday night may never be equalled.  The 64-61 score in favor of Fort Wayne Snider over New Pal tells only a fraction of the story.

New Pal was down 28 points before roaring back in this game that featured more than 1,300 yards of total offense.

The teams combined to score an incredible 41 points in the final nine minutes of the game.

The entire weekend of football at Lucas Oil Stadium was magical, but this game was a one-of-a-kind thrill ride.

No time to rest up.  Indiana plays tonight, Purdue is at Pitt tomorrow, and Butler travels to Cincinnati on Wednesday,  The Pacers continue their west coast swing Wednesday against the Clippers.  It just never stops, and who would want it to.