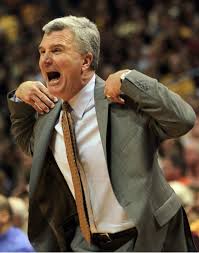 If my changes are implemented, Bruce Weber would never again look this silly. Well, that’s probably not true as he looks silly without calling a 30-second timeout.

College basketball is a great game.  The season is short so the results of every game are meaningful.  Players aren’t as adored and entitled (in most programs) as they are in pro sports.  Collaboration is rewarded.  The environments at arenas and gyms are electric.  What’s not to love?

Well, there are plenty of changes I would make if I were the czar of college hoops.  Some of my changes are borderline inane – the rantings of a guy disappointing with the direction of college sports as a branding agent for universities that should be more concerned with the quality of the education offered than the number of applications it can generate through televised sporting events.

1 – Get rid of the one-and-dones – or at least limit them.  The NBA is the architect of the one-and-done policy, so attacking this through the universities is a challenge, but the NCAA could restrict the number of scholarships a school is allowed to offer over a four-year period.  Programs can have 13 players under scholarship at any time, so how about restricting the number of scholarships to 18 over rolling four-year periods.  That allows for a transfer or two per year, or the occasional player who jumps to the NBA early, but penalizes a program for churning through an endless supply of NBA ready athletes who have no interest in education.  Let’s call this “the Kentucky Rule”.

2 – Eliminate the celebritization of coaches, and their obscene salaries.  Paying coaches as tenured professors would allow them to focus on teaching their players rather than constantly working ADs for extensions that come with massive raises.  College employees should each be focused upon the mission statement of the school, and that means education – not an ravenous pursuit of victory that requires moral and ethical compromises.  It would also likely send the leeches concerned more with filling their pockets and building fame than building a legacy of strong and wise men scurrying for a different profession.  Let’s call this “the John Calipari Rule”.

3 – Severely restrict the recruiting calendar – Allow college coaches to attend unlimited high school games during the season, but end the meat-market of summer basketball.  For all that is goofy about college coaches, it can’t be debated the grind of recruiting is insane.  End the summer contact periods so coaches have some time to live a pseudo-normal life.  Summer basketball is a terrible venue for evaluation.  Kids and coaches are all exhausted, and the leadership of many summer programs is questionable at best.  Continue to hold the events because some of the programs teach the game well, but ban college coaches from attending. Let’s call this “the Coaches are People Too Rule”.

4 – Pare down the rule book to what’s important.  I’m big into simplification, and right now the NCAA rule book is so complex that universities employ entire compliance staffs to monitor rules and ensure strict obedience.  That’s a result of the twisting and distortion of the simple rules that used to govern college sports, so the simplification of rules must be combined with another effort that makes abuses of the rules a risk that coaches are unwilling to take.  And that means…

5 – Expel cheating coaches.  You cheat, you lose your job, and not just your current job.  Coaches who cheat would forfeit their ability to lead the basketball program of an NCAA member.  Cheat – goodbye.  Easy.  Simple.  Gray area – gone.  Let’s call this “the Kelvin Sampson Rule”.

6 – Eliminate the silly limits on practicing.  Whether the NCAA limits supervised practices and workouts to 20 hours a week, dedicated college basketball players are going to find a way to work a hell of a lot longer than that.  Why not make it worth the players’ efforts by giving them access to the coaches employed to instruct them.  Do other departments restrict the amount of hours a student is allowed to spend with professors?  Let’s call this “the Logic in Education Rule”.

7 – End the parade of cupcakes.  Once and for all, let’s segregate the haves and have-nots.  There are more competitive conferences in college hoops than college football, so the circle of excellence extends beyond the Power Five, but the endless parade of noncompetitive opponents is not what fans pay to see, nor what players enjoy.  Texas Southern, Alcorn State, IPFW, Oakland, etc… are teams that would be better off playing each other than Michigan State, Kentucky, UNC, and other blue bloods.  And the teams from the top basketball conferences should play each other more often.  For the Big Ten, I would like to see basketball return to playing a balanced schedule – each team playing home and home with the other 13 teams.  Extend the conference season into December.  Who loses?

8 – Eliminate timeouts inside the last two minutes of the game.  Gone.  Done.  You know what, the hell with it, eliminate timeouts period!  The ends of close games would become incredibly exciting and the micromanagement of coaches incapable of outthinking their own players would end.  More focus would be paid to teaching the game in practice, rather than choreographing player movement for sets called during timeouts.  Let’s call this “the Bob Knight Rule” in celebration of a coach who prepared his teams to play without the crutch of timeout instruction.

9 – Goodbye instant replay being used to reverse calls.  The focus of any activity with the word ‘college’ in front of it should be education.  Getting every call exactly right is not the goal.  Delays for replay do nothing for the enjoyment of the fans or education of the players.  It’s a solution for a problem that has no effect on what matters in the game.

Whew, that’s a lot of change, and I don’t any of us lives to see even one of them implemented.  This list is not about reality, but about a version of reality I would like to create.  College basketball would be a better game for players and fans, but less lucrative for coaches and administrators, so none of this will ever come to pass.  That’s okay.  Dreaming is good for the soul, and college basketball is a pretty damn good game.