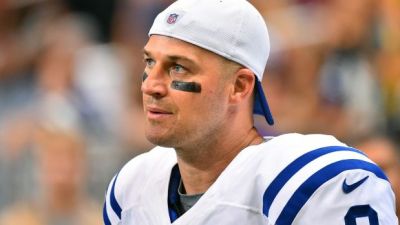 Wearing a hat backwards is for kids, not for 40-year olds like Matt Hasselbeck. So is being 4-0 as a starting quarterback.

December is traditionally a month where questions about sports are answered.  Football teams are moving through the final chapters of their seasons, and the silt starts to settle for basketball teams revealing who has a chance for championships and who doesn’t.

For those teams that don’t meet expectations, job security is a difficult quarry, and those questions will be answered too.

In central Indiana, some jobs are in jeopardy and others are completely safe.  No one in this area is guaranteed success.  Because the Texans are hot, even the Colts perceived stranglehold on the AFC South is in doubt.  The Pacers are rolling, but being tied in the loss column with the Cavs 16 games into the season means very little.  Purdue has impressive wins against Florida and Pitt, but are still four weeks from its first Big Ten game.  Some Indiana fans are convinced Tom Crean is coaching his last season in Bloomington, but with the Big Ten being down, anything can happen.

So many questions that will be answered soon enough.  Here are the top 8:

2 – Is Purdue a Final Four candidate?  Purdue is rolling, and will likely continue to.  The Boilermakers have played two games against comparable programs, and have beaten both Florida and Pitt in impressive fashion.  Both games were close until the time came for the team most serious about winning to assert itself.  Last night at Pitt, Purdue did that with roughly 11:30 left.  Behind by one, Ryan Cline hit four straight three-pointers and AJ Hammons got busy on both ends to finish with 24 points and 12 boards in a 13-point win.  Against Florida, up by three with 10 minutes left, Purdue blew the game open for a 15-point win.  Matt Painter has done what Tom Crean hopes to at Indiana – find a way to back away from the abyss and resurrect his career without being asked to leave.

3 – Will Indiana have a new head basketball coach in 2016?  Tom Crean is struggling to amass support for his continued employment as the coach of the Indiana University basketball team.  If the Hoosiers lose tonight’s game against Duke, IU fans are not going to start picketing Assembly Hall.  After all, Duke hasn’t lost to a non-conference opponent at Cameron in 15 years, and with the exception of the run to a Big Ten championship in 2013, Crean’s Hoosiers haven’t beaten a ranked team on the road.  That means expectations are manageable tonight for IU.  The game in a couple of weeks against Notre Dame at the Crossroads Classic is a little different, and a loss would set the stage for a weird season where the fanbase would again be conflicted between rooting for Indiana and hoping IU fails enough for a leadership re-plate.

4 – Can the Pacers be taken seriously as a threat to LeBron and the Cavs?  Paul George is playing the best basketball of his career, and the Pacers are the surprise team in the NBA.  There are a variety of reasons for the Pacers winning 11 of their last 13, but George’s level of play is chief among them.  Averaging 27.2 points and 8.1 rebounds per game have elevated George into the pantheon of current NBA players.  The rest of the team functions very nicely together, and the defense has been better than expected.  Tonight’s game at the Clippers and Saturday’s against the Jazz will be stiff tests, but the Pacers look to be a solid pick for one of the higher seeds in the NBA playoffs.  At least the Pacers appear to be a contender for a top four slot 20% of the way through the regular season with the Pacers and Cavs tied at five losses each.

5 – Is Ryan Grigson’s job safe?  All is quiet in the Colts front office.  Or at least the media has stopped its loud questioning of Grigson as a general manager.  The genius of signing Hasselbeck as the back-up to Luck has trumped the foolishness of the Trent Richardson trade and Bjorn Werner’s draft.  Winning cures a lot of ills, and if the Colts invited chaos into their facility by losing three straight to the Patriots, Saints, and Panthers, they have welcomed calm by beating the Broncos, Falcons, and Bucs in their last three.  Grigson remains a bit of a lightning rod in debates among Colts fans.  For every good move, there is a bad one, and vice versa, but for now he appears to be the safe bet to remain the pilot of this fascinatingly inconsistent team.

6 – Can the Hoosiers defend anyone?  While the offense certainly clicked nicely against the wretched Alcorn State Whatchacallums, the defense allowed penetration with alarming frequency.  Whether they have won or lost, the Hoosiers have not shown an ability to defend with the intensity or intellect of a tournament ready team.  Stopping the ball and defending ball screen might not be the correctable issue some in the media believe them to be.

7 – Is Butler a threat to win the Big East?  Chris Holtmann’s Bulldogs do what they always do – play hard, rebound with tenacity, and meet or exceed expectations.  Tonight’s game against Cincinnati will either show the loss to Miami was an anomaly, or that Butler will have trouble with bigger, longer teams.  Butler can shoot it with anyone, but they miss Alex Barlow’s toughness and grit on the defensive end.  If they win tonight, Butler is a player in the Big East.  If not?  Well, they will still be fun to watch – as well as 0-0 in the league.

8 – Does anyone give a damn about the Big Ten Championship game at Lucas Oil Stadium Saturday night?  Iowa vs. Michigan State is not exactly sexy.  Iowa is a middling team from the lesser half of the Big Ten, and Michigan State is still seen as Ohio State and Michigan’s tagalong little brother.  Even with an invitation to the College Football Playoff on the line, I’m not sure investing four hours watching it is the most interesting or productive use of a fan’s time.