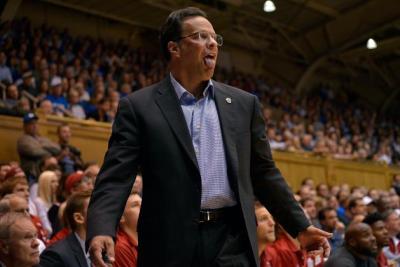 Tom Crean’s gig might be in jeopardy, but if you were disappointed last night, the fault is yours.

If you were disappointed in Indiana’s level of play during last night’s 94-74 loss at Duke, it’s your own fault.

The problem that has caused an ugly uprising of Indiana fans has nothing to do with the level of play for the Hoosiers – it’s the ridiculous expectations set prior to the season for this group by the national media and boosters.

Since 2013, Indiana’s defense has been confused, passive, and porous.  There was no tangible reason to expect improvement this year, but Tom Crean and others close to the program did a nice sales job on this group, and so they were ranked far out of kilter with reality.

The good news for IU, everyone said, was the return of Yogi Ferrell, Troy Williams, and James Blackmon Jr.  Few said, “Hey, aren’t these three the same key players from last year’s team that couldn’t defend a Macy’s mannequin?”

I don’t blame the national media.  They can’t keep track of 351 teams, or even the 60-70 who are legit contenders for at-large bids in the NCAA Tournament.  But they would have known better if they had looked under the hood and kick the tires of these Hoosiers, rather than listen to the salesman busily trying to turn down the heat in his Cook Hall office seat.

Coaching 101 demands a leader undersell your team to the media.  Setting the bar low is always good business when trying to predict the behavior of 18-22 year-olds, but Crean is so covetous of positive media coverage that he and his emissaries present only the positive.

The fact is today as it has been for two years, Indiana either doesn’t care about defense, doesn’t have the athletic ability to defend, or doesn’t scheme properly to defend.  The sad reality is likely an unholy combination of the three.

Many of the players who defended with indifference last season and the season before that are back, and that pundits felt this group would somehow morph from being a poor defensive group to being good enough to contend for a national title reflect as poorly on them as the Hoosiers defense reflects on Crean, the guy who did the sales job on himself and then the media to allow some undeserved moments of bliss basking in some very premature positive light.

Pivoting the Indiana program toward consistent effort and execution on the defensive end would be as surprising as a front line staffer at Wendy’s suddenly developing the business acumen to become CEO of the company.  Sure, it could happen, but suddenly embracing the goal oriented behavior and people skills required to run a company is a longshot.  And so it is for the Hoosiers and its defense.

Crean spoke in his postgame press conference about focusing on tomorrow’s opportunity to improve and the test that lies ahead Saturday at Assembly Hall when his Hoosiers play Morehead State.  Who can blame him?  Looking to the next game sure as hell beats looking back at this revelatory nightmare at Duke.