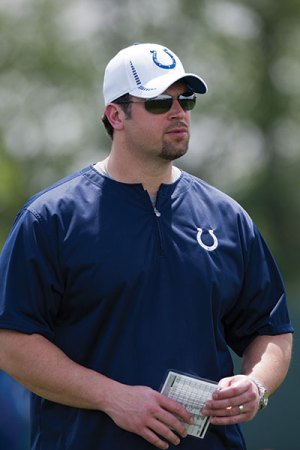 Ryan Grigson is taking a lot of criticism for the roster he built mostly through free agency, but there is some good to celebrate as well.

There will quite obviously be a companion list of reasons that Indianapolis Colts fans should demand general manager Ryan Grigson be replaced, but today’s list is a look at the positive side of the ledger – which features a considerable list of successes.

Grigson’s reign has been marked by high risk ventures – some have paid dividends, and others have not.  To use coach Chuck Pagano’s favorite prop, Grigson has put many chips on the table.  Several have added to the Colts stack and others have been lost to the house.

The list is going to reflect moves that led to three straight 11-5 records, two AFC South championships, and one trip to an AFC Championship Game.  Those records are results of Grigson’s work – caused by moves listed here.

Here are 10 reasons Colts fans should celebrate the return of Grigson as the architect of the Colts roster:

1 – The trade of a second round draft pick to the Miami Dolphins for cornerback Vontae Davis brought a lock down corner to the Colts – at least he was among the very best in the NFL in 2014 before regressing a bit in 2015.  There are few positions more important to success in the NFL than a cover corner, and getting Davis for a second rounder was a very effective way to upgrade a position of urgent need.

2 – Drafting Andrew Luck.  A third grader could have assessed Luck as a superior prospect to Robert Griffin III, but just as Bill Polian is correctly credited with drafting Peyton Manning ahead of Ryan Leaf, recognition is due Grigson for not trying to outsmart the evaluators process as he made the obvious choice.

3 – Trading up for the third round pick that was used to select T.Y. Hilton.  Grigson swapped the 97th overall pick in the 2012 NFL Draft plus a fifth rounder for the 92nd overall pick which was used to draft a legitimate take the top off the defense receiver in Hilton.  A Pro Bowl selection in 2014, Hilton emerged as one of the most dynamic big play receivers in football with 82 catches for 1,345 yards and seven TDs.

4 – Signing Pat McAfee to a five-year extension in 2014.  McAfee is a field position enhancer of the highest order.  Punters can be the difference in a close game, and McAfee is one of the most talented and proficient artists at his trade in the history of the game.  For a losing team, an outstanding punter is a wasted luxury.  On a championship level team, he can be the difference between a Lombardi Trophy and a miserable plane ride home.

5 – Signing veteran safeties with some football left.  Mike Adams went from the scrap heap to the Pro Bowl in 2014, and Dwight Lowery has been quite good in 2015.  Many experts wanted Grigson to target a safety in each of the past two drafts, but Grigson knew that quality could be had at great value by bringing in the right overlooked guys at a position of need.  Teams don’t need to shop at Sak’s for safeties – championships can be won with safeties from Kohl’s.

6 – Signing the 40-year-old Matt Hasselbeck to a one-year, $3-million deal.  What looked like a waste of cash for a guy who would never play because of Luck’s resilience, is now a huge bargain.  Hasselbeck was a cheap (and necessary) insurance policy, and the team’s season would be sunk without his work.  Hasselbeck is earning every cent of his cash as defensive lines batter him relentlessly.

7 – Frank Gore being signed as a free agent helped Colts in several ways.  It’s unlikely that Gore will total 1,000 yards rushing this season, but can you imagine what the Colts running game would look like without him?  His veteran presence in the locker room is a big deal as well because Gore simply loves to play football, and that love is understood and admired by teammates.

8 – Replacing Pep Hamilton with Rob Chudzinski.  Either Grigson spearheaded the move, or allowed Pagano to make the move to replace Hamilton with his guy as offensive coordinator.  If Pagano’s job is on the line, he should be allowed to go down swinging with a staff of his own choosing.  Not sure the result has been a more productive offense, but given the circumstances it was the right move.

9 – Drafting David Parry in the fifth round.  There is a level of fight to Parry that I really like.  He might not be transcendent like the Rams Aaron Donald, but for a fifth rounder, he’s very productive and brings an attitude to his activity that has helped make the Colts front improve marginally from 2014 to 2015 while investing less.  Claiming improvement is a stretch, but I like David.  He reminds me of a defensive version of Jeff Saturday.

10 – Jerrell Freeman signed as a 26-year-old from the CFL.  Grigson likes to search under rocks for potential contributors, and he found a fine inside linebacker in the CFL shortly after he was hired as GM of the Colts.  Freeman’s journey from Mary-Hardin Baylor to a sustained run as a starting ILB for the Colts has been a great success story of indomitability, and Grigson played a significant role.

For those who can recite the negatives of Grigson’s time as Colts GM, it might do some good to remember positive pieces too.  The result has been a quick turnaround following the end to the Peyton Manning era and launched a surprisingly quick run of success – maybe too quick for Grigson’s own good.

All the talk of a return to the Super Bowl built expectations this group was incapable of living up to.  I was caught up in that tide too, and now have blond hair that serves as a daily reminder that buying into the hype with a bet that a team will go 13-3 isn’t always a great idea.

There is bad too with Grigson, and I will get to that list soon enough.