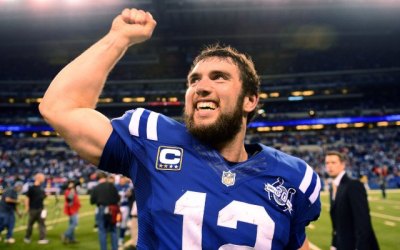 A healthy Andrew Luck is the biggest reason for hope in 2016.

Here is what needs to happen for the Colts to qualify for the NFL Playoffs:

Holy crap!  That’s a lot that needs to go right for the Colts season not to end after the regular season finale against Tennessee this Sunday at Lucas Oil Stadium.

So let’s assume the end is nigh, and 2016 is the focus for Colts fans.

We need some reasons for optimism moving forward as it appears serious change is coming for the Colts following this oddly unsatisfying season they began as Super Bowl favorites.

Here are 10 reasons to feel really good about the Colts chances to return to the postseason in 2016:

10 – Expectations are likely to be easier to meet in 2016.  Leading up to the 2015 season, many smart people thought the Colts offense would be historically explosive, and punch its ticket to Super Bowl L.  They will not experience that burden in 2016.  No more bets I will bleach my hair if the Colts don’t carry a 13-3 record into the postseason.

9 – Offensive weapons continue to abound.  Maybe Andre Johnson hangs up his cleats, but that wouldn’t be a serious for the Colts.  With T.Y. Hilton, Donte Moncrief, Phillip Dorsett, and maybe even Duron Carter at wide receiver, the Colts will be in a position to go vertical if the offensive line can keep Luck clean.

7 – The offensive line will be a year older and (hopefully) better.  The entire line returns intact, if Colts management so chooses.  Whether that is a reason for hope or pity is debatable, but I am choosing to see the Colts o-line issues as correctable without a massive overhaul.

6 – The NFL won’t kick the Colts out of the AFC South.  As long as the Colts are in the AFC South, they will have a legitimate chance to win the division.  Blake Bortles and Marcus Mariota might help ease the Jaguars and Titans into mediocrity, but neither looks like they will challenge the Patriots for an AFC crown anytime soon.

5 – A new and outstanding coach/GM might be in place.  Because of Luck’s presence, the Colts will be able to attract attention from many of the best candidates for their front office and coaching positions.  Every offseason, rumors swirl around Bill Cowher, Jon Gruen, Nick Saban, and Mike Holmgren returning to the NFL.  One of the requirements for landing one of these big fish is a franchise quarterback in his prime.  Check.  While I believe Chuck Pagano to be an outstanding coach, change at the coaching position after a mediocre season is technically a reason for hope, and that’s what this list is all about.

4 – If the Colts sign some of its own free agents, resources will be short to add more.  GM Ryan Grigson has had a little trouble with signing big money free agents like Donald Thomas, Gosder Cherilus, Art Jones, LaRon Landry, and others, so an offseason without the necessary financial resources to shop aggressively might be just what the doctor ordered to help Grigson (if retained) rehab his image as the Rob Deer of NFL talent assessors (some home runs, but a lot of strikeouts).

3 – Losing free agents won’t kill roster.  Sure, it would be nice to have Dwight Lowery, Coby Fleener, and Dwayne Allen back, but it’s not necessary to be successful.  Losing Adam Vinatieri would be a blow.  Jerrell Freeman is another guy the Colts need to keep.  Greg Toler will likely play his final game as a Colt this Sunday.  One of the positives of finishing 8-8 or 7-9 is that no one is irreplaceable.

2 – The 2016 NFL Draft will help.  If the Colts finish 7-9, they are likely to draft in the mid-teens.  After missing on three straight first round picks (it’s premature to assess Phillip Dorsett as a bust, but he sure didn’t help in 2015), the Colts need an infusion of talented youth to build a quality offensive and defensive front.

1 – Andrew Luck will be back healthy.  Obviously, Luck being 100% is a critical factor for the Colts to indulge in championship hopes.  He is a game changer, and an asset that can cover for a variety of weaknesses.  Three healthy seasons – three trips to the playoffs.

Have to be honest – my heart wasn’t pot committed to this list.  I suspect the Colts arc has turned downward, and until the front office turmoil settles, I fear this season is not the bottom of the Colts fall from grace.