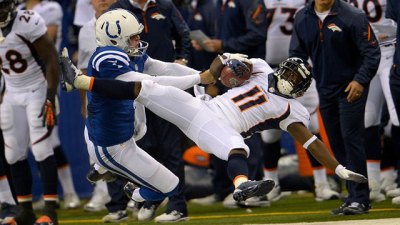 After the Colts win against the Dolphins, a couple of fans posted tweets that mocked the Colts propensity for celebrating what they deemed meaningless wins and accomplishments.

Punter Pat McAfee took exception and let the two know through a few tweets of his own that featured a word many (not me) consider profane that he wasn’t up for any friendly banter with fan boys who don’t know what wins mean in the NFL.

Here is an example of the tweets that offended McAfee and his response:

Indy_Joe tweet – “@PatMcAfeeShow You guys raising a banner for AFC South Runner Up????? Hey, we did it! Let’s jump in the canal and paaaarty!!!!!!”

McAfee response – “Hey Joe.. The only thing you’ll be coaching… Is how to eat a big bag of s**t”

10 – McAfee has boundless energy and a love of life.  We are attracted to those who are blessed with attributes we covet, and Pat lives his life as many of us would like – with a zest for fun but a relentless eye on responsibility.  As a sign of fan admiration, McAfee’s jersey was the 17th most popular in the NFL during 2014 – not among punters, but for all players.  That means McAfee’s jersey outsold at least half the quarterbacks in the NFL.  A PUNTER!

9 – McAfee is not a self-important elitist.  There are professional athletes who work at being unapproachable.  They believe that because they make elite level income they are elite – insipidly entrenched in a fantasy world where people not of their ilk don’t belong and should not engage.  McAfee believes the opposite.  He’s a guy who makes an absurd amount of cash for kicking and punting a football, and refuses to look down his nose at people who make far less money to do things far more important like teachers, cops, and firefighters.

8 – McAfee will make a tackle when needed.  Colts fans remember the lick McAfee put on Trenton Holliday of the Denver Broncos.  Unlike some specialists, McAfee enjoys being a football player.  Fans and his teammates like seeing McAfee pop a return guy every once in awhile.

7 – McAfee answered adversity with honesty and contrition.  When Pat was arrested after his infamous dip in the White River, he came completely clean, took his medicine, and went about changing his image and focus.  He showed class and a willingness to admit his error.  People like tearing down the pious, and building up the openly flawed who seek redemption.

6 – McAfee works tirelessly to honor and help veterans.  The Pat McAfee Foundation is a non-profit organization dedicated to providing scholarship assistance to the sons and daughters of U.S. military personnel.  There are few causes more universally loved and appreciated than those dedicated to making veteran’s lives a little richer and easier.

5 – McAfee dominates the field position battle for the Colts.  Good teams need an advantage to become a championship game, and McAfee provides a consistent advantage through pinning opponents inside the 20 yard line.

4 – McAfee has a smart sense of humor.  Pat’s funny.  He just says stuff that pops into his head, and it makes us laugh.  That brought him to the attention of the Bob & Tom Show, where McAfee has entertained fans in Indy and all over the country.  We like funny people, especially when they are laughed at by Bob & Tom.

3 – McAfee remembers our names.  As is the case with many brilliant people, McAfee can meet 100 people and remember all of their names.  That makes people feel a connection, and it’s that connection that ties us to Pat.

2 – McAfee is an open book.  Telling the truth is a great way to make friends – or lose them.  So far, Pat has been very adept at making friends while telling his version of the truth.

1 – McAfee is great at his job.  If McAfee wasn’t one of the best five punters on the planet, we would know him as that guy who delivers our packages and makes us laugh, or the sales guy we like to see every couple of weeks making his pitch, or the lawyer who makes us laugh while he works the system to his client’s benefit.  Because he’s a great hunter, we pay to be amused by him at the Palladium.