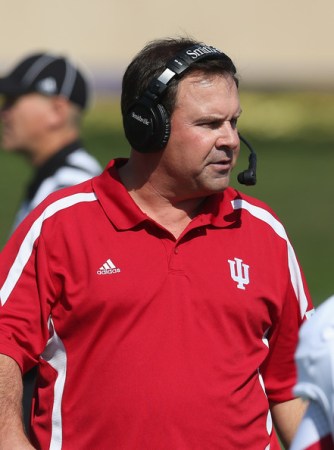 Kevin Wilson doubled his pay for the next six years by getting Indiana to a bowl in 2015.

Kevin Wilson has done the impossible by earning a contract extension at Indiana.  After 20 years of shuttling one coach after another through Bloomington, it seems Indiana has settled on its long-term solution.

Worth $2,550,000 per season, the extension sets Wilson up through 2021 as the architect of a program that has slowly progressed over his five seasons from terrible to okay.

This is the first time I have ever written about Indiana extending the contract of a football coach.  No coach since Bill Mallory has survived beyond his first contract, and Mallory was fired after the 1996 season.

Whether Wilson is the longterm solution to take Indiana on the next steps toward becoming a good Big Ten team will take another few years to assess, but here are 10 reasons why Indiana athletic director Fred Glass did the right thing in extending Wilson:

10 – Wilson has built a Hoosiers brand on explosive offense.  It takes time to build a brand, and under Wilson for the last five years, Indiana has become a very friendly outpost for those talented offensive players who crave an opportunity to shine.  Indiana players on the offensive side of the ball have a chance to go to the NFL.  Conversely, the defense has been putrid for all five years under Wilson, but you have to start some place.  Indiana has staked its claim on offense.

9 – The right coach for IU is not necessarily the best coach.  Indiana needs a good coach, but not a great one.  The key for continued slow growth is stability, and a great coach would bounce quickly to a program that fills its stadium in a way that still seems impossible at Memorial Stadium.  The charge for Glass when he hired Wilson was to find a coach who might develop into a great coach slowly enough to need to remain in Bloomington long enough to drop roots.  He’s done that.

8 – Middle of the pack is pretty good for IU.  Sure, the goal is a Big Ten Championship, Rose Bowl, or CFP berth, but let’s be real.  Indiana is not an elite Big Ten team, and unless Ohio State, Michigan State, and Michigan suffer serious reversals of fortune, the chance for the Hoosiers to wind up playing in any of those events is scant.  A trip to New York, Jacksonville, Atlanta, of some other outpost (not Detroit) with a late December bowl is a nice reward for the Hoosiers.  Wilson has shown an ability to get his team to that level.

7 – Wilson’s replacement would be a long-shot to be better.  There are three kinds of coaches interested in an Indiana level of job – a retread at the end of the road trying to squeeze another contract out of a career in decline, a talented coach with a broken wing that needs to be repaired (think Steve Sarkisian), and a MAC level coach on the come looking to build a career and bounce to a championship level program (think Urban Meyer when he was at Bowling Green).  Anyone better than Wilson would likely bounce quickly.  Anyone worse would fail.  Wilson is perfect because he is good enough, but not too good.

6 – Even at $2.55 million, Indiana is saving cash.  Wilson has moved from 13th in the Big Ten in annual compensation at $1.3 million (including bonuses) to roughly the middle of the pack, and that’s where he belongs.  If Indiana tried to hire a haymaker to replace Wilson – a clear improvement – it would have cost far more than $2.55 really large and the likelihood would be the coach builds (or rehabs) his brand to roll quickly elsewhere.

5 – Hoosiers went to a bowl, right?  Minus a 2007 season inspired by the life and death of Terry Hoeppner, Indiana failed to qualify for a bowl every season back to 1993.  Whether IU went to the New Era Pin Stripe Bowl, the Ace Hardware Wingnut Bowl, or Kellogg’s Cereal Bowl this season, a bowl is a bowl.  The coach who got them there is more likely to get them to another than a coach who hasn’t.

4 – Rebuilding broken program is not a quick fix.  Patience is not a virtue enjoyed by college football fans.  Indiana fans have long wondered how Alabama became the Crimson Tide, while IU has devolved into college football’s losingest program.  Neither happened overnight, and as it would take Bama years for its football program to erode to mediocre, gaining enough ground to reach mediocrity has been a long process for the Hoosiers.  Going from mediocre to good is going to be another long process, and Wilson has gotten Indiana to mediocre.  Faith that he’s the guy to take IU to good has been reasonably built.

3 – Relationships with high school coaches are strong.  Talking to high school coaches, there is a respect for Wilson that extends beyond platitudes.  Unless Wilson’s successor already had a foothold in dealing with Indiana’s best HS leaders, recruiting efforts by the Hoosiers would have required trust be built slow and steady by another coach, or move away from a recruiting hotbed key to Indiana’s success.

2 – Bull in the china shop has mellowed.  Wilson did not roll into Bloomington ready for the challenges of portraying himself as the CEO of a Big Ten football program – even Indiana’s.  There were serious quietly made behavior corrections that were required to put Wilson in a position to survive as the coach, regardless of on-field success.  He succeeded in maturing, and earned the opportunity to roll into a second contract.

1 – Stability is key to continued growth.  Since 1997, Indiana has paraded one coach after another through the Sample Gates to lead the Hoosiers out of the doldrums of mediocrity.  With the exception of an eight-year stretch under Mallory when IU went to six bowls and a magical Rose Bowl season in 1967, Indiana has sucked at football back to the 1940s.  Athletic directors combed through candidates who were either trying to start careers or cash out at the end of them, and settled on failure after failure.  Spinning the wheel to find another coach willing to accept the job would result in a backwards step – or six.

Time will tell whether this was the right move.  Personally, I like Kevin.  He’s a pleasure to talk to, and a smart leader.  Friends of mine who are IU grads, after hearing about the extension, texted  me with the same question, “What’s the buyout?”