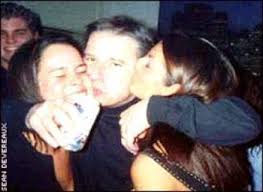 If your the head coach of a college basketball team, a picture like this will result in the need to seek employment elsewhere – as was the case in 2003 for Iowa State coach Larry Eustachy (shown at a party with Mizzou students after an Cyclones loss to the Tigers).

Wednesday night, Calgary Flames defenseman Dennis Wideman cross-checked a linesman to the ice on his way to the bench.  He has since been suspended by the NHL pending an investigation.

That overt violent act against a professional official brought to mind a series of things athletes and coaches should never do on and off the field, court, or rink.

It’s sports after all – a diversion from life and death, not life and death itself.  Work hard, test skill, eat, love, sleep, repeat.  That’s a life in sports.

Take it too seriously, and the very worst traits of humanity – all we hope never to be – are shown right there under the bright lights, on Sportscenter, and through a social media viral explosion.

Here are 10 very solid guidelines for behavior athletes and coaches should never engage in.   Deviate from these tenets, and you might be the next Dennis Wideman.

10 – Answer idiots on social media/message boards.  Those who enter the arena to battle under the bright lights have very few to answer to, and none of them spend time on message boards.  Critics have no understanding of the sacrifices made to compete.  Their ignorance is not worthy of your attention or response – angry or reasonable.

(Items nine and eight constitute a special section of rules dedicated to Lance Stephenson, an id-driven young man who abides by a unique behavioral compass.  We can learn a great deal by watching Lance and avoiding imitation.)

9 – Pick up a $10,000 team dinner tab.  Born Ready proved himself to be born to be fleeced when he picked up a $10K tab at Ruths’ Chris in Indianapolis Monday night for teammates the night before a game against the Pacers.  A year and a half ago, Lance turned back a guaranteed $44-million from the Pacers to sign for a guaranteed $18-million from Michael Jordan and the Charlotte Hornets.  His teammates clearly know a patsy when they see one.  Keep your money.  Hold it close.  Those giant checks are going to stop rolling in at some point and 10-grand is going to mean something to you then.

8 – Refuse to pay a prostitute.  Yeah, this rule is driven by another Lance misadventure during his rookie season while on a road-trip in his native New York.  The prostitute that Lance stiffed made public a videotape (which contained mostly audio) of their encounter when Lance refused to cough up the agreed upon cash for services rendered.

(Another Lance driven rule is to not announce a pool party at your house on a public Twitter feed, but it seemed like piling on.  Maybe one day, we will do a list made up entirely of Lance Stephenson behaviors to avoid.  Until then, let’s pick on Larry Eustachy!)

7 – (for college head coaches) Leave a road campus arena after a loss and go to a frat party.  This is the Larry Eustachy rule.  In 2003, Eustachy’s Iowa State team lost to Mizzou in Columbia.  Instead of heading back to Iowa State, Eustachy headed to a campus party where he was photographed drinking with attractive co-eds.  There were also reports that he did the same in Manhattan, Kansas, after an Iowa State loss to Kansas State.  That time, he rolled into a frat party.  If you are an adult who feels the need to drink, do it with your peer group.

6 – Look to the stands to see what your mom or dad think.  It seems incredible, but if you watch professional or college athletes, you will occasionally catch him or her glancing into the stands to get a little parental advice.  Oh no!  Can you imagine a district manager at a corporate meeting looking into the hallway to see what a parent thinks of his presentation?  Parents had their window of input, and now that access is restricted to the direct report – the coach.  To confuse the kid with additional counsel does no one any good.

5 – Poke an opponent in the eye.  This is the Adam Woodbury rule.  Woodbury is a senior at Iowa who twice last season flat-out poked the player he was defending in the eyeball.  These weren’t errant swipes, but Three Stooges-esque pokes.  There are two areas where a gentleman’s agreement prohibits physical contact.  See #2 for the other.

4 – Pay attention to the fans.  People who are paid to be in the arena should never listen to those who pay.  Gladiators compete, and the peanut gallery either cheers or boos.  Sometimes the rabble makes an effort to get under the skin of the athletes, and it’s at that moment some focus is required to not let those voices be heard.  Understanding the economics of sports should allow athletes to make a separation, or be fueled by the uninformed – and usually tired – critiques.

3 – (for assistant coaches or strength trainers) Scream and taunt an opposing player.  If a head coach wants to ride opposing players, that’s a little bit cheesy, but he’s the boss.  An assistant coach, or in the case of Indiana University Basketball’s strength and conditioning coach Lyonel Anderson, should stay in his lane and advise/counsel his own players.  After Tuesday night’s game against Wisconsin, Badgers forward Nigel Hayes said that Anderson was riding him throughout the game and fueled his fire.  I’ve found Anderson’s behavior curious throughout the season, but it can now be argued that his behavior served to motivate an opponent during what became an overtime loss.  Like the deceased librarian said to the Ghostbusters, “Shhhhh!”

2 – Nut tap.  As Austin Powers said, “That’s not cricket!”  Hitting an opponent in the family jewels is not acceptable.  Period.  With cameras everywhere, it’s almost impossible to get away with anyway.

1 – Make violent contact with an official.  This just cannot be done.  Maybe hitting a showboat referee like Ted Valentine seems like a good idea once in a while, but there is simply no instance where it is anything but an act of criminal violence.  Suspending Dennis Wideman is a good start by the NHL, but I think this is a case for the courts.  Criminal charges should be filed against Wideman.  Our laws against violence were enacted to protect men and women from attacks exactly like Wideman’s.  Officials are almost always impartial and fair-minded.  They make mistakes – like all of us.  Inferring injustice by a referee or umpire requiring physical retribution is always illogical and leads to criminal behavior.