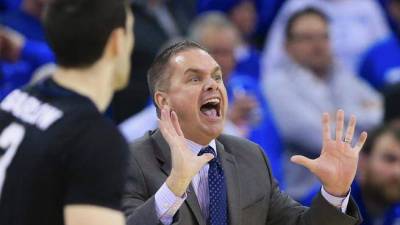 Butler coach Chris Holtmann would like to avoid looking like this tonight as the Bulldogs host Georgetown.

Tonight will be a great night of college hoops for those of us in central Indiana who view it as one of America’s four major leagues, and the scheduling gods have smiled on us again as the two big games don’t conflict with one another.

Butler hosts Georgetown at 7p (FS1), and Indiana will take on their first top six team of the season in the Big Ten at Michigan immediately after (ESPN).

Both games are incredibly important for each program for different reasons as each heads in a different direction.

Butler needs a win to rescue a season.  Indiana needs to prove itself worthy of national recognition after a schedule that has been less than daunting so far.

Here are the 10 reasons you should spend tonight watching college hoops:

10 – Max Bielfeldt returns to Michigan.  There is nothing quite like facing a team for whom you played for years.  There are rivalries and there are rivalries, and the biggest any of us enjoys is facing your former employer.  Bielfeldt served Michigan faithfully, and is now pursuing a graduate degree at the Kelley School of Business.  He’s been productive off the bench as a Hoosier, but might feel a need to bring a little extra as the Hoosiers fight to hang on to their share of first place in the Big Ten as he faces old teammates and bosses.

9 – Butler fans need a validation of ‘The Butler Way’.  Doing more with less through embracing the culture of subverting personal motivations in favor of team success is how Butler has built a program that has evolved from a pretty good Horizon League entry to a competitive Big East team ranked ninth in the nation just over a month ago.  Fans are more covetous of Butler players who embody their ideals than they are those who are wildly talented, but it’s hard to win without superior talent regardless of the culture.  Fans need an affirmation that this season is not lost due to a lack of superior talent + wonderful culture.

8 – Troy Williams.  Lots of recent pub on national TV for Yogi Ferrell and Thomas Bryant, and very little for Williams has brought the potential for stress to Hoosier hospitality for this team.  Winning keeps Williams from feeling the pressure of his NBA draft stock failing, but a few losses would make life very different for this Hoosiers team.  It’s possible Williams is such a highly evolved sort that the (at least) temporary extinguishing of his NBA dream is a secondary concern to team goals, but if he’s a typical young adult there are voices in his ear that make that difficult.

7 – Butler needs a deep breath after an emotional month.  Andrew Smith’s passing was difficult for a basketball team and community that loves basketball, but knows life is more important.  Being able to smile a little bit after a hard earned win would be a wonderful gift for a program in need of some good news.

6 – Indiana’s season is a temporary referendum for Tom Crean’s leadership.  There has always been a disconnect between Hoosier Nation and Tom Crean.  Some believe he should be thanked for helping resurrect the Indiana program after the amoral and destructive reign of Kelvin Sampson, and others feel he has utterly failed in leading Indiana Basketball back to national relevance.  Very few love him, or feel his presence will be bring the sixth national championship banner they so desperately crave.  The first half of the Big Ten season was a success, but any faltering down the stretch may cause outcry from fans for a change in leadership.  This being the first game against a top six conference program is especially important for Crean and his team.

5 – Butler needs to flourish despite imperfection.  The vibe for Butler all season has been that they need to be perfect to win.  Blowing through empty offensive possessions or allowing easy conversions on the other end has cost the Bulldogs wins, so the team’s collective sphincter has tightened, and the Bulldogs appear to be in a frame of mind where fear of error is trumping the aggressiveness that allows playmaking, which is the joy of basketball.  Winning games while playing without joy is tough sledding.  Butler needs to find a way to enjoy the process – and succeed while doing it.

4 – With a win, Indiana guarantees a .500 finish and NCAA berth.  Regardless of who the Hoosiers have played in their front-loaded schedule of cupcakes, a .500 record in the Big Ten has punched tickets to the NCAA Tournament for virtually every team to earn one since the field expanded to 64.  A win tonight gives Indiana its ninth win, virtually guaranteeing a happy Selection Sunday in just over a month.

3 – Butler needs to learn it can beat a quality Big East opponent.  The Bulldogs have three conference wins – all against bottom dwellers DePaul and St. John’s.  Butler only has one game remaining against either of those teams, so the cupcakes are all but gone.  Georgetown doesn’t have a gaudy RPI ranking because of stumbles during the non-conference schedule, but they have figured things out and now sport a 6-3 record with wins against Xavier and Marquette.  A win against the Hoyas would represent growth.

2 – Hoosiers playing first real opponent.  In the first half of the Big Ten Schedule, Indiana played every team in seventh place and lower at least once, minus Penn State.  They have played none of the teams in the top six.  Starting with tonight’s game, IU will see teams currently in second thru sixth place six times in its next nine games.  Tonight begins the portion of the schedule where Indiana will earn its seed for March Madness.

1 – Butler fighting for life.  At 3-6 in the Big East, losses are especially meaningful.  With a balanced Big East schedule that forces the Bulldogs to play every conference team home and home, Butler has found the first half tough, and the schedule won’t get easier moving forward.  A 6-3 finish would allow Butler the .500 conference record likely necessary to earn an at-large berth in the NCAA Tournament should they be unable to win the Big East Tourney.